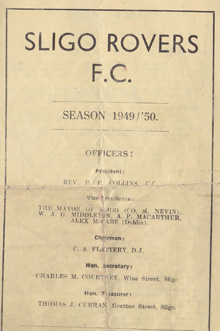 Like many schoolboys, Westland Row CBS educated Jimmy Field doubled up at Gaelic Athletic Football with the school team while playing the Association game with Johnville, with whom he won an FAI Minor Cup medal in 1945. Lining out at centre-half, he scored the first goal in the 2-1 final victory over Bohemians.

He spent a season with Shelbourne, who were linked to Johnville, and after securing employment with Arthur Guinness, he joined work’s team St James’s Gate in the Leinster Senior League.

He made his Dundalk debut in August 1949 against Waterford in the Dublin City Cup, but his season appearances were limited to covering for the injured Johnny Fearon.

Under Pat Gallagher’s management and in the absence of Billy Murphy, he got his chance in the following year at centre half for the Leinster Cup tie against Bohemians and he remained there until replaced after Christmas by Sean McCarthy.

In the interval, he was on the team that delivered the club’s first ever success in the Leinster Senior Cup when defeating St Patrick’s Athletic 2-1 on St Stephen’s Day 1951.

The halfback line of Billy Murphy, Jimmy and Paddy Gavin laid the foundations for the success, on a day when the new white ball was first used in Irish Soccer and minutes after its introduction Dundalk scored an equaliser.

He later returned to the Gate playing in the Leinster Senior League, becoming active in the Guinness Sports Club and representing the Irish Brewers against their UK regional counterparts at three sports—Soccer, Tennis and Cricket.

When his active sports career ended, Jimmy’s competitive juices were channelled into the more leisurely game of Bowls, for more than 30 years playing with Kenilworth Bowling Club and spending 14 years as the club’s Honorary Secretary.

“..is more constructive than is usual with centre-halves … an improving centre-half … very safe … a sound defender … brilliant performance … mastered the opposition centre-forward …”