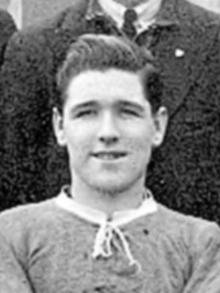 The Durkan brothers, Paddy and Walter, were steeped in football on both sides of the family. An uncle, Bernie Durkan, had captained County Mayo to an All-Ireland Gaelic Football title in the 1920s, while on their mother’s side their uncle Eddie Richardson played Gaelic with Crossmaglen as well as being a member of the Dundalk FC Committee in the late 1940s. In addition to participating in the two football codes, Paddy was also active in roller skating and roller hockey.

He made his first Dundalk club appearances with the Minor team in 1939, competing in the FAI Minor Cup, where he lined out in the centre-half position. In 1942 he helped Avenue Celtic to success in the Dundalk and District League as well as the Dundalk and Bellurgan League, and as a result he was invited by Bob Prole to join Dundalk.

With Jim Hearty available in the event of injuries to regular full-backs Billy O’Neill and Tom Crawley, natural full Paddy had limited opportunities for an extended run with the first team in his first four years and spent most of his time with the reserves. As a utility player he was called upon at some stage or other to fill all five defensive spots and on a number of occasions he started as the left-winger.

His chance for an extended run came in the 1946-47 season, starting the season at centre-half until Jimmy Dykes arrived before moving to left-full to partner Tom Beattie and he was an ever-present for the Shield, picking up a runner-up medal. He missed the early part of the 1947-48 campaign but by November he was back in his favourite full-back position with Arthur Whelan as his partner, adding another Championship runner-up medal to the one he received in 1942-43.

Many years later he recalled playing both with and against all the best players of the era, and none more special than the games against Shamrock Rovers and the renowned Paddy Coad. In 65 club appearances spread over 6 seasons he scored once, in the first round Inter City Cup game in May 1943 at Dalymount Park against Cliftonville.

Paddy had one moment of glory when, in April 1946, he played centre-half on the Dundalk Reserves when they won the Leinster Senior League’s Metropolitan Cup for the first time, defeating Bohemians in the final. His club career came to an end with the acquisition of a new team for the 1948-49 season and he went to Newry Town.

He continued throughout his Newry career to train at Oriel Park and after a successful 6-year spell, he was awarded a Testimonial when Linfield took on a Newry Selection, which included his younger brother Walter in goal, Tommy Traynor, Mattie Clarke, Jimmy Jones and a host of League of Ireland and Irish League stars.

Like many Dundalk fullbacks—Billy O’Neill, Billy Powell, Tom Crawley and Joe Ralph—he afterwards took to refereeing. One of his last local football activities was to captain the Royal Tigers to success in the 1955 Wilson Cup, the GNR Annual Inter-Departmental championship. In 1956 he moved to Winchester, and played in the local Leagues with works teams. Paddy continues his football interests through TV.

At the time of his death, aged 91, he was then the oldest surviving former player.

”When things are going badly against us he holds his corner well … shows speed in beating his opponent to the ball … kicked cleanly and lengthily … and tackled most resolutely.”