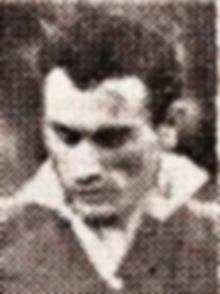 It was permitted to sign players specifically for the end-season Inter City Cup from clubs not participating in that competition. As a result of 1942 Cup final injuries, Dundalk signed two players for the inaugural end of season Inter City Cup: Sam Cullen from Brideville for the full-back position, covering for Tom Crawley, and Tommy Doran, Bray Unknown’s centre forward.

In the 1939-40 season he had been Bray's League topscorer with 13 goals and his four goals against Limerick in January 1940 constituted a club record for most goals in a League game.

Playing at centre forward with Artie Kelly moving to inside-right, he scored on his Dundalk debut against Distillery, standing in for the injured Jimmy McArdle, and he held his place through to the victory in the final against Shamrock Rovers.

Retained for the following season, an early season injury knocked him out for two months and deprived him of a place on the winning City Cup team. He returned at the beginning of the League and led the line to runner up spot, just a point behind Cork United.

In a twelve-week spell from the end of December he was at his sharpest, scoring in 10 from 12 games. This sequence included scoring in six successive matches, highlighted by a hat trick against his old club Bray Unknowns. His season total of 15 goals put him second in the marksman’s list to Don McDonald’s 17.