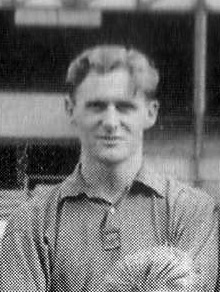 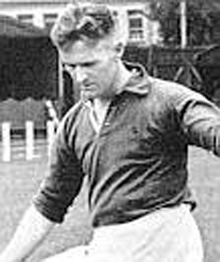 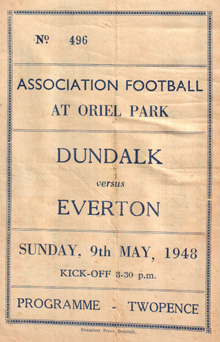 After a 4-0 League loss to Shamrock Rovers in the middle of January 1948, Dundalk’s season was fast heading down hill with just 4 points from the opening 6 League games, having conceded 12 goals in the process, and a long way behind runaway leaders Drumcondra.

Earlier in the season Jimmy McEvoy and Joe O’Brien had been transferred Cross Channel and Sidney Ellis had returned to Stoke at Christmas.

For the following fixture, against Bohemians, reserve centre half Tommy Clinton was promoted to the first team, making his senior debut at right half. Two months later, after just 8 appearances, he was transferred to Everton.

One of his appearances had been in a losing FAI Cup tie against Shelbourne and the remaining 7 games were during an unbeaten League run (conceding just two goals) that failed by a single point to catch Drumcondra for the League title.

He scored his only goal in his last game before being transferred in a key March game against Shamrock Rovers at Oriel Park, when his equalising penalty conversion kept Dundalk in the hunt for League honours.

By this stage Tommy’s performances had attracted the attention of a number of clubs—Luton Town were the under-bidders. Employed by the GNR and a native of Dublin, he had played with Leinster League Transport and after been transferred to Dundalk, where he worked at the local railway station, he joined Dealgan Rovers in the Dundalk and District Junior League. Rovers reward was a new set of jerseys out of the transfer proceeds!

His signing for Everton took place at the Dundalk railway station. Everton secretary Theo Kelly had been sent to do the business and his train was pulling out of the station when Tommy thrust the signed papers through the window!!

The Everton squad at that time included Irish Internationals Alex Stevenson, Tommy Eglington and Peter Farrell and within another few months would include Peter Corr.

Before leaving Everton, Tommy would have further Irish International teammates at Goodison Park, Jimmy O’Neill, George Cummins, Don Donovan and Mick Meagan. Everton converted Tommy to a full back and over the following six seasons he made 80 appearances (73 League and 7 FA Cup) with the Goodison Park side.

Competing for the International right full back spot against the likes of Sean Fallon (Glasgow Celtic) and Seamus Dunne (Luton Town), his debut International appearance was in a friendly at Oslo in a 3-2 victory over Norway. He made just three Irish appearances, all at right full back, and all away from home.

On the occasion of his last cap, a March 1954 1-0 win against Luxembourg in a World Cup tie, he had two former Dundalk players as team mates. Tommy Traynor was making his International debut and Jimmy Hartnett was earning his last cap.

Johnny Carey, Blackburn Rovers manager, signed him for the 1955-56 season to provide experienced cover for the full-back positions and after 8 appearances (6 League, 2 Cup) he returned to Merseyside with Tranmere Rovers for the following season (9 League appearances). Afterwards he joined Runcorn in the Cheshire League.

He retained his Everton connections for many years—his wife and his daughter both worked at Goodison Park.

With Everton Tommy had one forgettable experience, in the semi-final of the 1953 FA Cup against Bolton. Just before half-time he missed a penalty kick, but at the time it appeared of little consequence since Everton were 4-0 down. However, a great Everton recovery in the second half reduced the deficit to 4-3—Bolton’s victory earned a Wembley appearance against Blackpool in the famous ‘Stanley Matthew’s Final’.

“Kicked strongly … tackled well … Here is a player with the physique, the strength, the stamina and the ability to attract the attention of shrewd judges looking for the players of the future.” After two games, the man from the Democrat foresaw Clinton’s transfer to Everton less than two months later.