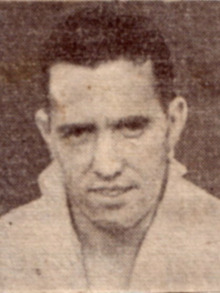 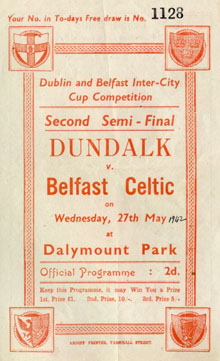 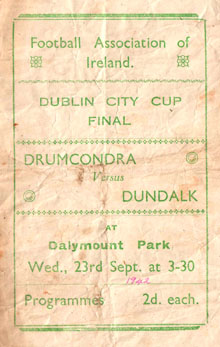 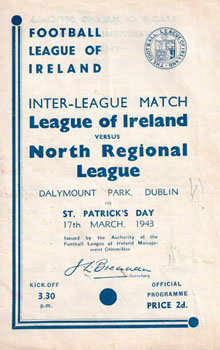 With a club career of 52 goals, all those above him on the club’s all-time scoring list, except Leo McDonagh and Terry Eviston, played at inside and centre-forward. Only Joey Donnelly (14) has scored more club FAI Cup goals than Barlow’s 9. And he shares with Paddy Turner the distinction of scoring a hat trick in a competition Cup final.

Starting as a ten-year old, Paddy lined out with a succession of Athlone clubs including Abbeyvilla, Wanderers, Pioneers and Hibernians. His first significant honour came with Hibernians when as a 16-year old he helped them to victory in the Connaught Junior Cup.

He was on the Irish Junior International team that defeated Scotland 5-4 at Dalymount Park at the end of the 1936-37 season—scoring the winning goal direct from a corner kick. He also turned out with both Connaught and Leinster in Inter-provincial matches.

After defeating Amiens Celtic in the 1937 Leinster Junior Cup final—Paddy scoring in the 3-0 victory—the result was reversed after an objection when it was discovered that the club secretary had forgotten to register the team!

In July 1937 Newry Town signed him on a month’s trial. They converted him to a winger, from where he scored 38 goals in the 1937-38 year. The Irish League was a good showcase for his talents—excellent control, hard to dispossess, speedy, a willingness to cut inside, an accurate crosser, an excellent shot, an eye for goals—and his displays attracted cross-channel attention.

After his performance in a friendly game against Leeds United, the watching Huddersfield Town manager, Clem Stephenson, promptly made an offer to Newry and within 24 hours Paddy, in the company of Stephenson, was on his way to Huddersfield. He went straight into the first team on the following Saturday against the unbeaten at home Liverpool at Anfield and contributed to two goals in a 3-3 draw.

In a squad that included half dozen International players, Paddy’s performances also drew the attention of the FAI and they requested Huddersfield to release him for upcoming International games.

However, after a serious knee injury that required four operations—the damage was done by a sliding tackle from his Chelsea opponent on a frost-bound pitch—specialists told him that he would never play again. He recalled many years later; “They sent me home when the War broke out, crippled and with no money. The War Office cancelled all contracts, otherwise the Players Union would have given me a lump sum of at least £5,000.”

Returning to Athlone, the advice from his masseur included swimming in the Shannon every feasible day and turf-cutting! Notwithstanding the Huddersfield medical advice, within 12 months Paddy was ready for more football action and was in the Sligo Rovers squad (making his club debut in March) that qualified for the 1940 FAI Cup final.

The Sligo selectors recognised him as their best forward but in their Cup final day lineout they ignored the formbook and played Mattie Began, who having scored Sligo’s winners in the semi-finals of 1939 and 1940, was felt to be lucky for them. It didn’t work out that way, Sligo losing in the final to Shamrock Rovers and by season end had resigned from the League.

Paddy’s December 1940 arrival at bottom of the League Dundalk (scoring on his debut against St James’s Gate), playing outside right in front of Joey Donnelly, quickly transformed Dundalk’s season. He stayed at Oriel Park for five years and specialised in Cup goals, scoring in eight Cup ties over four campaigns.

His understanding with Donnelly and his skill at corner kicks made him a key member of the winning FAI Cup team in 1942, Dundalk’s first Cup win after losing in three finals during the 1930s.

To finish that season in style, he added an Inter City Cup medal to his collection when Dundalk got the better of Shamrock Rovers in an All Southern final, after disposing of Belfast Celtic in the two-legged Semi-Final.

His lone goal, with ten minutes remaining, settled the second leg of the Celtic tie to give Dundalk a 3-2 aggregate win after a classic game in which Paddy “had a great tussle with Bertie Fulton”. He played a key role in the 1-0 final victory over Rovers, providing the cross that Artie Kelly finished with fifteen minutes remaining.

In the following season he accounted for a half dozen goals in Dundalk’s 3-game City Cup campaign, including a hat-trick in the 4-2 final win over Drumcondra. In March 1943 he played with the League of Ireland team against the Irish League.

After five seasons at Oriel Park he spent 1945-46 with Limerick, scoring 4 goals, before returning to England for the 1946-47 year, playing with Chelmsford City in the Southern League, then under the management of Arthur Rowe, later to earn fame as manager of Tottenham Hotspur in the early 1950s.

He recalled many years later that his total income while at Chelmsford, combining his part-time football with a job, was £25-£30 per week at a time when full-time professionals with the leading clubs were earning £12!

A season later Paddy was with Wisbech Town in Cambridgeshire in the United Counties League, when they won one League Championship title and where in three seasons he made 108 appearances and contributed 38 goals. He afterwards organised a Sportsman’s Club for Wisbech that earned £350 per week and got them out of a financial crisis.

He paid one last visit to Oriel Park in the summer of 1966 when, before the appointment of Alan Fox as player-coach, he was acting manager for a couple of months and spent a while training the club’s Dublin contingent. There was football in Paddy’s blood—his uncle Pat Geoghegan had been the goalkeeper with the Athlone Town team of the early century.

On his transfer to Huddersfield Town from Newry, Ireland’s Saturday Night said: “ …never shirks a tackle … speed and craft … his control is excellent … is hard to dispossess … his centres are always a source of trouble and danger … there is every reason to anticipate that he will go on and prove a rare find.”