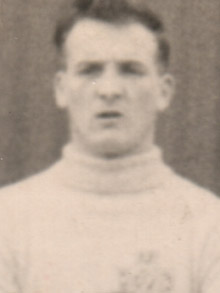 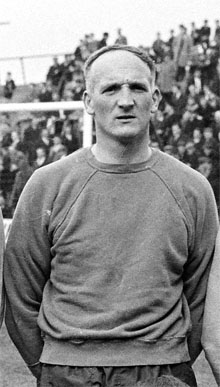 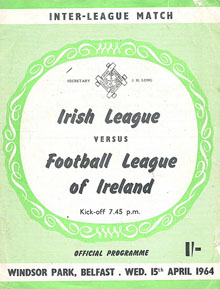 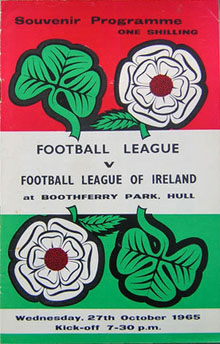 Eamonn Darcy had played one senior game with Shelbourne when he took on the goal keeping duties with the Dundalk reserves at the beginning of the 1952-53 season. When the previous season’s FAI Cup-winning keeper Walter Durkan did not sign until a few weeks into the new season, he found that the first team slot had gone to Jimmy Baker and Eamonn’s reserve form meant that Walter was employed as a winger on the reserve team.

By late February Eamonn’s form could not be ignored and he found himself on the first team for the remainder of the season, giving outstanding performances in the 3-match Cup marathon against Waterford.

For the following season he started as Number 1 but gave way in November to George Brennan. But Eamonn was determined to make his mark as a goalkeeper. Whilst on Dundalk’s books he saved enough money for his passage to England, determined to stay until he found a club who would keep him. After trials with Bury, his enterprise paid off when he called upon Oldham Athletic and in September 1954, for a fee of £150, he was on Athletics’ staff.

By the middle of October he had made his first team debut, and over the following two seasons he made 45 English League appearances before returning to Ireland, linking up with Shamrock Rovers for the 1956-57 season. Over the next 10 seasons, with Rovers and later Drumcondra, he was one of the leading keepers in the League of Ireland, earning 10 Inter League selections and a Republic of Ireland B Cap.

With Rovers he won two League Championships (1956-57 and 1958-59) and added another one with Drumcondra in 1964-65. While he collected all the other League trophies—Shield (2), City Cup (3), Leinster Cup (3) and Top Four Cup—he only managed an FAI Cup runner up award, losing out in the 1957 final when Drumcondra got the better of Shamrock Rovers.

He made nine appearances in European club competition--4 with Rovers and 5 with Drumcondra.