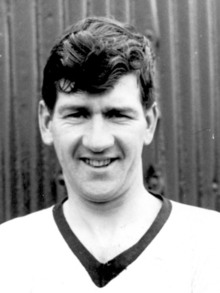 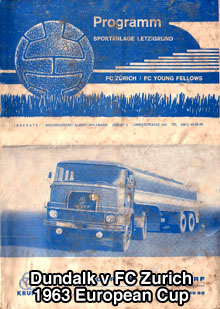 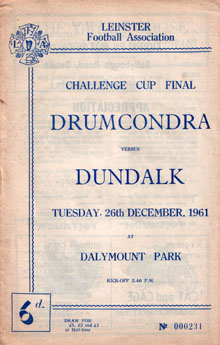 Francie Callan’s early football career was with a number of Upper End teams—at Schoolboy level with Bendigo (under-14), St Malachy’s (under 16) and in the local Junior League with St Joseph’s and Arsenal. With all of them he scored goals—and plenty of them.

Dundalk trainer Gerry McCourt had periodically played him with the reserves when he was just 16 years old and then brought him into the Reserve panel on a regular basis for the 1954-55 season, where his performances earned him two League games at the tail end of a dreadful season.

He made his debut on March 20th 1955 against Transport at Harold’s Cross (0-0) and on the following weekend his first Senior Oriel Park outing was against Bohemians (0-2). Under player-coach Walter Rickett for the following season, Francie had a dream start, scoring in three of the first four Shield games and was the leading League (10) and All-game (16) goal scorer.

He repeated this feat in the following year, 1956-57, and was heading in the same direction at the beginning of 1957-58 when Peter Doherty, Manager of Doncaster Rovers, came a-calling. By the beginning of November Francie was on his way to the English League. A plentiful supply of goals with the reserves saw him promoted after three months, making his English League debut against the Bill Shankley-managed Huddersfield Town and he scored twice in a 2-2 result.

During his period at Doncaster he was given great help to settle by ex-Dundalk Paddy Gavin. Over 2 seasons he made 28 League appearances, scoring 6 League goals. Afterwards he linked up again for a couple of seasons with Walter Rickett, now manager at Southern League Ramsgate Athletic. He scored plenty of goals at Ramsgate but his second season was disrupted by injuries.

He returned to Oriel Park for the 1961-62 year, joining a forward line that included Jimmy Hasty, Willie Coleman, Victor Meldrum, and Liam Munroe. Picking up where he had left off four years previously, he scored twice on first match back, in a 5-0 City Cup first round win over Sligo Rovers at Oriel Park and a few days later was on the score-sheet again in the second round tie against St Patrick’s Athletic.

Francie’s 20 season goals was sufficient to earn the Leading Marksman Award for the third time. The acquisition of Dermot Cross saw Francie in the inside left role for the 62-63 Championship winning season, when his understanding with Cross and Jimmy Hasty was one of the critical factors in the season.

Contributing 6 goals to the first Championship Pennant success in 30 years, none was as important as his equalising goal in the dying minutes of the last game of the campaign against Bohemians at Dalymount Park. The resulting draw was sufficient to give a one point winning margin.

While he was out of first team favour in the spring of 1965, he played with the Reserves that consisted mainly of local youths—Tommy and Brian McConville, Gerry Savage, Tommy Kelledy, Jim Smith etc—and before the season was completed Francie had collected a Castrol Cup Winner’s Trophy, the first Reserve triumph in the previous 20 years and a memento which he treasured as much as his Championship one.

Only he and Tootsie McKeown of the 1963 Championship winning team were still at Oriel Park for the 1966-67 Treble Year, which delivered another League title as well as the Shield and Top Four Cup. A trip to Spain in the summer of 1967, a reward for the season’s endeavours, closed his Dundalk career with another trophy when the ‘Spanish Cup’ was taken home.

He moved to Portadown at the beginning of the 1967-68 year but returned to the League of Ireland by December to finish the season and his playing career with Drumcondra, contributing three goals during his 15 appearances (12 Lge, 3 FAI Cup). Appropriately, he finished his career under Sam Prole, who had been in charge at Dundalk when he had started with the Dundalk reserves 18 years previously.

As a result of work commitments he declined the opportunity of managing Drogheda, preferring to coach Schoolboy teams in the Dundalk Minor Leagues. His 34 Shield goals has been bettered only by Eddie Carroll and his 96 career goals places him in sixth position in the club’s all-time scoring list, just one place ahead of his mentor, Gerry McCourt.

Dundalk Democrat’s season review after the 1962-63 Championship victory: “First among the forwards I place Francie Callan for intelligent play, good ball play and one of the most thorough workers we ever had.”