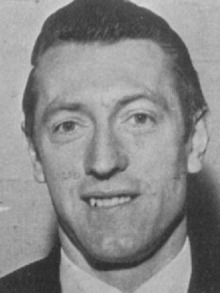 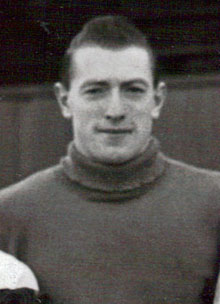 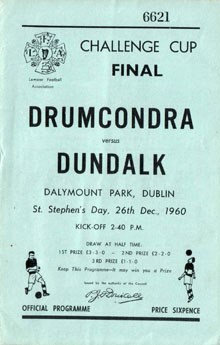 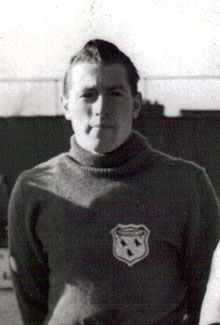 6ft 1in and weighing 12 and a half stone, Christy Barron, with a sure pair of hands and keen anticipation, was ranked as one of the best League of Ireland goalkeepers of his era. Starting with Dublin junior club Talbot United, he spent two seasons with Drumcondra, making his debut in a 1958 Leinster Cup game against Bohemians when Jimmy Morrissey scored all the goals in a 4-0 win. During this season he shared the keeping duties with Maurice Swan, playing in 14 Cup and League games, against 13 for Maurice.

On the following St Stephens’s Day he collected his first League competition honour when Drums defeated Dundalk 5-2 in the final of the Leinster Senior Cup. His first representative honour came shortly afterwards for the Dublin City XI against the Provinces XI in a trial game to select the League of Ireland team.

He was 21 years old when he came to Dundalk for the 1959-60 season, making his debut in the opening City Cup fixture against Sligo Rovers at Oriel Park and quickly made his mark, keeping clean sheets in his first three appearances. With Shay Noonan, John Murphy and Johnny Robinson in front of him there was no meaner defence in the League, especially away from home.

By 1962-63 he had a new defensive backline—Murphy, McKeown, Lyons—when Dundalk took its second League Pennant, after a 30-year gap. By the end of his fifth club season, 1963-64, he had made over 200 appearances, missing just five games in this period, and was the popular winner of the club’s first Player of the Year Award.

His last club season was the 1966-67 Championship winning year when he was back up for Kevin Blount, being called upon only 3 times. But his enthusiasm for the game never waned—in a season end reserve game against Tullamore he lined out at centre forward, scoring twice in a 4-0 victory.

He later moved to Jacobs and spent two seasons in the Leinster Senior League, taking time out to qualify in 1969 as a referee. His final 251 club games outstripped all previous marks for goalkeeper appearances and has been topped by only two other keepers in the club’s history, Ritchie Blackmore and Alan O’Neill.

He worked in Backhouse’s Butchers shop in Dundalk and after moving to the UK in 1970, he took time out to successfully complete his studies and qualify as a meat inspector, his job until retirement in 2002. His surprise retirement presentation from his work colleagues included a suitably emblazoned Dundalk keeper’s Jersey, presented by the Dundalk club.

His first move to the UK brought him to Swindon, Wiltshire. A keen golfer, he joined Marlborough Golf Club, where he was twice club champion and scratch match play winner on one occasion. In 1976 he moved to Swindon Golf Club, where he reduced his handicap to 3 and added further honours, including 3 Club Championships, 2 Scratch Matchplay titles, represented Wiltshire County on more than 20 occasions, and was beaten finalist in the Wiltshire County Matchplay championship.

In 1988 the family moved to Mansfield, where Christy started marathon running, and in 1990 completed the London Marathon in a time of 3 hours and 49 minutes, raising funds for Great Ormond Street Children’s Hospital. Two years later he finished the Potteries Marathon at Stoke, taking 20 minutes less.

After a late season loss 2-1 to Shelbourne in the 1962-63 League Championship victory Dundalk Democrat commented on Christy’s performance: “Yet another outstanding display by Barron. This was one of his best games of the season, performing wonders at times and he certainly could not be blamed for either score on this occasion.”