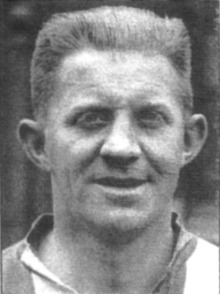 Harry Sellars was club coach for a couple of months at the beginning of the 1947-48 season.

In a 9 year period, from 1947 to 1955, Dundalk recruited five cross channel coaches, all ex-players with considerable playing experience. Through the adoption of the best modern coaching practices, it was the club’s aim to improve the playing standards of the first team and most importantly to introduce young players to best practice from an early stage in their development.

Harry Sellars was the first of these appointments but his role as Dundalk Coach survived for barely half a dozen games at the beginning of the 1947-48 year and by mutual agreement his contract was terminated in early October 1947. Notwithstanding this experience the club persisted with cross channel appointments and within weeks he was replaced by Jack Barker, ex-Derby County.

At the age of 20 Harry had quit his job as a miner, joining the playing staff at Darlington as an amateur. After a spell as a professional with Leadgate Park in the North Eastern League, in 1923 he was signed by Second Division Stoke City. This was the start of a long association between Stoke City and the Sellars family.

Harry, starting at inside forward and finishing his career at left half back, stayed for 15 seasons and made 419 first team appearances. His son, Johnny Sellars, was also a left half back and he signed for Stoke in 1941. When he retired in 1958 he had made 442 appearances. Father and son, from 1923 to 1958, had clocked up a remarkable 861 appearances with the same club.

Apart from Harry’s short stint at Dundalk, he had also spent a period as assistant manager at Stoke. He was described as a 90 minute player, whose main strengths were well placed passes and good covering in defence.