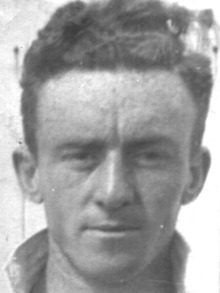 The failure of proven English League goal scorer, Jimmy Bullock, to deliver the goods in the early season 1931-32 League games (2 goals from 7 starts) led to the signing of Buncrana-born John Smith from Coleraine. From Buncrana Celtic he had joined Coleraine as a 20-year old in 1929.

In 69 consecutive games, over his two seasons with the club, he scored 55 goals, becoming the second club player, after Eddie Carroll, to exceed 50 goals aggregate in consecutive seasons.

After his 13 League goals from 16 starts in his first year, he maintained his form into the Championship-winning 1932-33 year with 14 from 18 appearances.

At the end of the Championship-winning year he transferred to Derry City, where he scored 12 goals in the 1933-34 year. He played with Sligo Rovers in their debut 1934-35 year and had an unsuccessful period with Fulham.

For 1937-38 he was with Limerick, another club in their debut League season, and his 10 League goals put him at the head of the newcomers goal scorers chart. A serious eye injury ended his football career and he returned to Buncrana to work with Lynch’s Bakery.

The Democrat’s pen-picture after the Championship win described him as, “…the most unselfish player we ever had…holds on like grim death to any and every back…never shirks a tackle—not if the tackler was a lion…scored 14 League goals and earned as many more.”