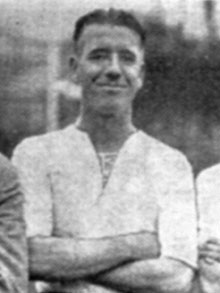 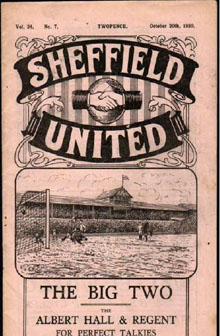 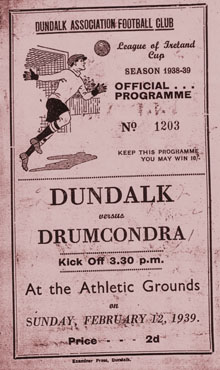 The career-ending injury suffered by Bob Maloney at the end of the 1937-38 season left a big gap at the heart of the Dundalk defence. To fill the centre half spot, the equally experienced ex-Hearts and Hibernians Willie (Billy) Reid was recruited. Now very much at the veteran stage, Willie in his 17th senior season was adding the League of Ireland to a CV that already read Irish League (4 seasons), American Soccer League (4 seasons) and Scottish League (8 seasons).

He made his debut along with five other new arrivals in the opening game of the 1938-39 season. By Cup time Willie was the only one of the newcomers on first team duty, and was now playing at right half after Henry Hurst was moved to centre half at the beginning of the League campaign. His season and his Dundalk career ended after the FAI Cup semi-final loss to Sligo Rovers at the end of March. He finished the season with Distillery in the Irish League, playing 3 City Cup games.

Willie was one of six footballing brothers whose family moved from Scotland to Belfast in the early century. Their father had played with Kilmarnock and the family settled in East Belfast’s Ballymacarrett, a soccer hotbed. Starting with junior clubs Ulster Rangers and Bloomfield Olympic, Willie joined Glentoran in 1922 and over four seasons made 100 appearances (14 goals).

Playing mainly at right-half back, he lost out twice on an Irish Cup winner’s medal, losing in the finals of 1923 to Linfield and in 1925 to Distillery. He did however play a key role in landing the 1924-25 League Championship, scoring in a decisive late season tie against Newry Town. In March 1926 he was on the Irish League team that played the League of Ireland at Dalymount Park—the first ever meeting between the sides.

At the end of the 1925-26 season he headed for the USA, joining Philadelphia in the American Soccer League for the 1926-27 year where he became a firm crowd favourite. But before the season had ended and amidst growing financial problems he was with Bethlehem Steel, causing an outcry in Philadelphia.

According to the local Philadelphia Enquirer “Reid is one of the most polished halfbacks in the American League and had become such a favourite with the fans that his name was legion among the followers of the locals.” They did not spare the Phillies management, and asserted that the transfer deal was a “colossal boner”.

The Steelmen were one of the most powerful and most successful clubs in the early century American League scene. Willie spent four successful seasons with them (winning a championship medal in his first season), becoming a Bethlehem Legend, and making 81 appearances (6 goals), leaving at the end of the club’s last season before it disbanded due to financial circumstances.

He returned to Belfast at the end of its last season, 1929-30, and after a short spell with Intermediate League side Willowfield he was transferred to Heart of Midlothian. Over seven seasons, three as captain, he became a Hearts stalwart and had 133 appearances under his belt when he was awarded a benefit in 1937, before being released in August 1937.

After one more season in Scotland, playing with another Edinburgh club Hibernians, he returned to Ireland in 1938, coming to Oriel Park. In October 1930 he had been awarded his only International cap when lining out with Northern Ireland in a 5-1 defeat to England at Bramall Lane, Sheffield, becoming the first non-Scottish Hearts player to receive International honours.

In 1946 he managed Ballymena when they returned to the Irish League after the war. He closed his career with Short Brothers and Harland Antiques.