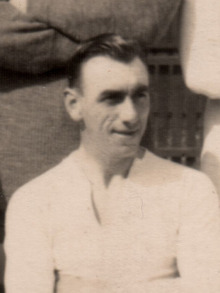 First signed by Newcastle United in 1922, where he failed to break into the first team, Ebor Reed had also spent a year each with Cardiff City (6 apps) and Nottingham Forest (5 apps), before stepping down to Third Division North Rotherham United where his strong tackling, at centre-half and left-half, gave him plenty of first team action.

In two seasons (1927-28 and 1928-29) he made 65 appearances, before moving to Derry City for their inaugural Irish League 1929-30 year. From the centre-half spot he scored six goals, all from penalties. Failing to agree terms with Derry for a second season—he wanted £5 per week plus £50 signing on fee and was offered £4 and £20—he headed for Dundalk.

During his two Dundalk seasons he missed only four games. In his first year he anchored the defence at centre-half to the club’s most successful season since becoming members of the Free State League, with runner up positions in both League and Cup.

The acquisition of Albert Harrison for the centre half spot saw Ebor at left-half in his second club season, and in early September he collected a Presidents Cup medal when the club won its first trophy after a stunning 7-3 win over Shamrock Rovers.

But the big names imported for this year proved a failure and financial considerations dictated a year-end clear out—Ebor was one of those not retained and for the following season he was with Portadown.