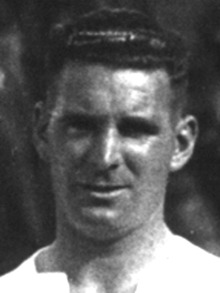 Billy Powell was one of four men signed by Lincoln City in the summer of 1932 from Southern League Merthyr Town and over the next two seasons he was their reserve full back, making 4 League appearances. With Merthyr Town reserves he won his first memento when they carried off the Welsh League Championship.

He made his Dundalk debut at right full in the opening fixture of the 1934-35 season, in a Shield game against Dolphin, playing alongside Len Richards. They became the defensive mainstay in a season that delivered two runner-up spots, first in the Leinster Cup and at the season end, the FAI Cup.

For the next season he switched to left full with Billy O’Neill as his full back partner and he added further to his runner-up medal collection.

Barring the odd injury he was on every team sheet and in his last season, 1936-37, he played in his third consecutive losing St Stephens’ Day Leinster Cup final.

Shortly after Dundalk’s FAI Cup exit in 1937, in a triple-header against Waterford, Billy moved to Newry Town, arriving in time to help them win the Mid-Ulster Cup.

For the 1939-40 season he was with Sligo Rovers, appearing in another FAI Cup final when Rovers lost out to Shamrock Rovers and he added yet another runner up souvenir to his growing collection when Sligo lost the Shield in a play-off against Bohemians.

He finished his League of Ireland career with a couple of years at Limerick. A gifted physio, he acted in that capacity with the Dundalk club for many years and ran a successful physio clinic mainly for sportspersons.

His brother Ivor had a long and successful career in the English Leagues between 1935 and 1955, playing almost 300 League games with 4 clubs and earning 8 Welsh International Caps.

After player-coaching at Port Vale and Bradford City, he managed Carlisle for a number of years and served under Don Revie at Leeds for 6 years (1963-1969) as coach/trainer.

In 1972 he moved to the coaching staff at the University of Bath and in 2006, on his 90th birthday made it to the Guinness Book of Records as the world’s oldest football coach. In January 2008 he was awarded the MBE for services to sport, and was still working at Bath

From Irelands Saturday Night: “ … he packs a good kick in either foot … a safe tackler … brainy in positioning … steady reliable defender who gives the utmost confidence to his goalkeeper… a sturdy never-say-die fighter.”