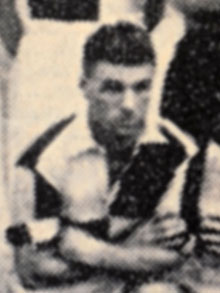 In his five club seasons utility player Joe Patterson filled every forward position, except left wing, and in his busiest club year (1937-38) he spent half a dozen games at left halfback, covering for the absent Henry Hurst.

In that season he scored 11 League goals, mainly from the inside right position, and the position he played in the losing FAI Cup final against St James’s Gate.

His 1938-39 appearances were all end of season games after being with Ards under their new manager Sam Patton.

During his last year with the club he spent a period on loan to Waterford. He played in three successive Dublin City Cup finals, and a winner’s medal came in his last in the 2-1 win over Cork in September 1937.

His single goal in 1935-36 came in the last match of the season against Brideville at the Athletic Grounds—by the time the new season had opened the club had moved to Oriel Park.

A Newry man, his early football had been with Newry Celtic and Sunnyside.