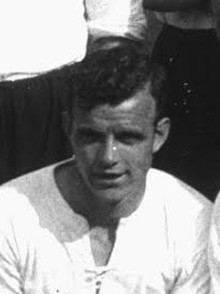 Dinny O’Boyle had been with Belfast Celtic and Crusaders before playing with Newry Town (1933-34) and Bray Unknowns for the 1934-35 season.

He started with Dundalk at right half back at the beginning of the 1935-36 season but following the arrival of Billy McAfee he was moved to inside forward until an injury to Henry Hurst saw him back in his natural position of left half back.

In his two Dundalk seasons he played mainly at left half, but also served as a utility player for the right half back and both inside forward positions.