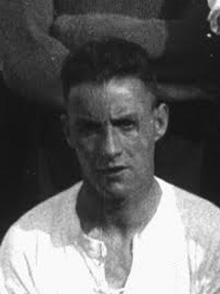 Hugh Morgan, who missed just one fixture in his debut 1935-36 season, was the right-winger on the club’s most lethal forward line. Morgan, Joey Donnelly, Joe Sayers, Gerry McCourt and Joe Mailey was the almost permanent forward line that clocked up 106 goals that year.

Sayers helped himself to 43, a club record, while Hugh’s performances earned his nomination to a panel from which the Irish International team was selected against Holland in December.

After two seasons, and a pocketful of runner-up medals, he spent a year with Newry Town, returning to Oriel Park in 1938-39 with Jimmy McArdle as his inside partner.

The arrival of Paddy Barlow in December 1940 effectively brought Hugh’s club career to a close but not before he brought his club honours to a half dozen runner up medals when for the third time he was on the losing side in a Dublin City Cup final, a September 1940 loss to Drumcondra.

“Newry have made a good capture and Hugh will serve them well. He will be missed at Oriel Park where apart from his excellent wing-play he was guaranteed to provide his share of goals.” The Democrat after hearing of Hugh’s departure to Newry following his two seasons with Dundalk.