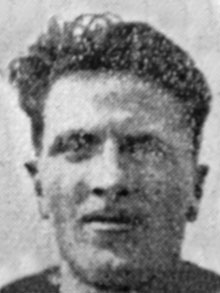 “Our classical footballer… Shows great control and is a bag of tricks…A great grafter who specialises in making openings for colleagues…Ties an opposing defence into knots every time.” This was the Dundalk Democrat’s description of Jimmy Mitchell after the historic first League Championship win in 1932-33.

At inside right he fed Eddie Carroll on the right wing and John Smith at centre forward to a season total of 44 goals. His right flank partnership with Eddie Carroll was a critical element in the Championship—one commentator referred to the pairing as ‘insuppressible’.

A great crowd favourite, he missed a single game during his one-season stay—the final game of the season, in the Presidents Cup—and was off on his travels again, this time to Glenavon. Before his Dundalk arrival he had been with Derry City (1929-30, 10 gls), Waterford (1930-31, 7 League gls) and Ballymena (1931-32).