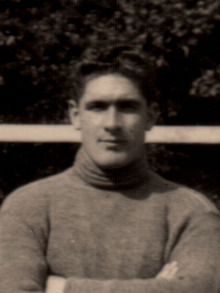 Goalkeeper Sam McMullan (5ft 11ins., 12st 10lbs.) played his junior football with a number of clubs in the Co Antrim area including Deramore, Malone United, Clady and Forth River, where the Ards' talent spotters found him in the middle of the 1925-26 season. Ards number 1 was leaving to join the Irish Guards and Sam found himself on first team duty shortly after his arrival.

In 1929 he was honoured three times with selection for the Irish League Inter League team. After 5 seasons with Ards he joined Dundalk in the summer of 1930.

He was an ever-present for the 1930-31 season when the club had its most successful year since its 1926 elevation to the Free State League, gaining runner-up position in the League and appearing in its first FAI Cup final, losing controversially to Shamrock Rovers in a replay.

He returned to Ards for the following year and stayed there until the end of the 1933-34 term, leaving after a dispute with the club. After a period with Sligo Rovers, he returned temporarily to the Athletic Grounds in the 1934-35 season during October, before Peter McMahon’s arrival.

For the following season he transferred to New Brighton where he made 8 English League appearances. Sam was one of three netminders that season for New Brighton, who conceded 102 goals and finished a long way last in the Third Division North.

The Dundalk Democrat reminiscing about the club’s keepers over the years once commented ‘Sam McMullan on his day was the most daring and brilliant of them all’ adding that ’his genial disposition won him great popularity’. Notwithstanding the Democrat’s assessment, according to Ards history “Sam could be volatile at the best of times.”

His son, Gordon, was a priest in the Protestant Church of Ireland and served as Bishop of Clogher (1980-86) and of Down and Dromore from 1986 until his retirement in 1997.

‘Splendidly built, not only looks the part but is the part, great anticipation, a quick eye and a safe pair of hands, good on ground shots, clever at cutting away the dangerous cross’…..was the positive assessment by Ireland’s Saturday Night’ in January 1927, shortly before Sam collected an Irish Cup medal when Ards defeated Cliftonville in the final.