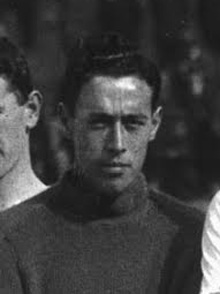 From Keady in Co. Armagh, goalkeeper Peter McMahon was playing with Keady United and still in his teens when Glenavon enticed him to Mourneview Park. He was not 20 year old when he made his Irish League debut at the beginning of the 1926-27 season.

He arrived at Dundalk in November 1934 in the midst of a goalkeeping crisis—three custodians had appeared in the opening thirteen games. For the next 75 games, until the end of the 1935-36 season, Peter missed only one game between the Dundalk posts.

His impressive form, playing behind Len Richards and Billy Powell, provided the stability for an unbeaten pre-Christmas League run and progress in the FAI Cup, with wins over Shamrock Rovers, Distillery and Sligo Rovers, only failing to Bohemians in the final by 4-3.

He gained two more runner-up medals in his second season, losing to Drumcondra in the final of the Leinster Cup and in his last club game he was again on the wrong side of another 4-3 final day loss, also to Bohemians, in the Dublin City Cup (May 1936).

His son, Eamon, was also a goalkeeper who played with Lurgan GAA club Clan Na Gael and with the Armagh county team. Although losing in the 1953 All-Ireland final to Kerry, Eamon had the distinction of being the first goalkeeper to play in every round of the All-Ireland without conceding a goal.

A couple of months after the final he was signed by Glasgow Celtic as cover and after making one first team game in two seasons he returned home, joining Glentoran. Over four seasons with the Glens he made 122 appearances, sharing in victories in the City Cup and Country Antrim Shield, but failing in the Irish Cup final, losing in 1956 to Distillery in a second replay.

He made one appearance on Dundalk’s first team in the 1961-62 season, stepping in when Christy Barron was injured. He later became a greyhound trainer and his dog, Alan’s Judy, won the Irish St. Leger in 1991.

“He is of the daring type and by taking risks has saved his side on many occasions. His sense of anticipation is so developed that difficult and awkward shots are made to look easy. Is sprightly on his feet and has a very safe pair of hands.” From Ireland’s Saturday Night, reviewing the potential candidates for inclusion on the Irish league team to play against the League of Ireland.