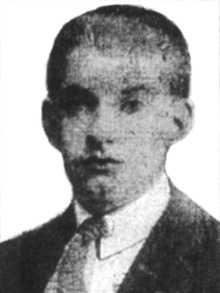 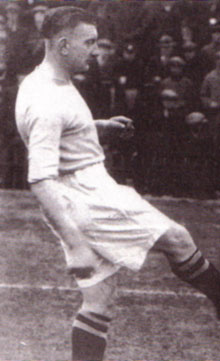 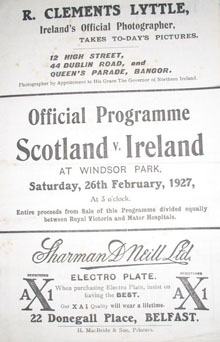 In 1922 full-back Andy McCluggage was transferred from Cliftonville to Bradford Park Avenue in Division Three of the English League. Three seasons, 85 appearances, a Third Division runner-up medal and two Irish international Caps later he was First Division bound with Burnley, for a fee of £1,600.

A 10-0 defeat on his debut, Burnley’s worst ever League loss, did not deter Andy and over the next six seasons he made the right-full position his own—when required he was also comfortable in the left back slot.

He finished at Turf Moor at the end of the 1930-31 season with more than 200 League and Cup appearances and the majority of his 22 goals were from penalties. By then he had brought his international caps to 13. This collection of caps made up for Andy’s disappointment in 1922 when he was selected on the Irish League’s team to visit Wales, but the trip was postponed and later abandoned.

On the occasion of one of Northern Ireland’s most celebrated International victories—a 7-0 win over Wales—Joe Bambrick scored a double hat-trick and Andy scored the ‘other goal’.

He arrived at Dundalk in time to play in the last match of the 1930-31 season, making his debut along with other new signings Albert Harrison and Sam Patton in the final of the President’s Cup against 1931 FAI Cup final conquerors Shamrock Rovers. After a 1-1 draw it was decided to hold the replay over until the new season.

McCluggage’s stay with Dundalk was a short one—by Christmas he was with Preston North End—but his impact was considerable. Twenty five years later the supporters voted him on to the ‘Best Ever Dundalk XI’ during the club’s first 30 years in the Free State League.

In late November 1931, the IFA contacted Dundalk officials regarding McCluggage’s availability for the December 5th 1931 Belfast game against Wales. The club’s immediate response was positive, but an injury kept him on the sidelines for the following two weeks.

For his role in one game alone he would be remembered. On September 9th 1931 Dundalk defeated Shamrock Rovers in the replayed President’s Cup final on a 7-3 score line, bringing the club’s first trophy win.

Five members of that team would feature on the 1956 Best Ever Dundalk XI—Jack Hampton, McCluggage, Albert Harrison, Joe Cassidy and Joey Donnelly.

It was reported that the transfer fee received from Preston covered his Dundalk wages ‘and left a little over’.

After a season with Preston and a period with Morecambe he returned for a short spell to his native Larne before retiring. Settling in Burnley, he worked as a maintenance engineer at Huncoat Pit up to his death in 1954.

On the occasion of his 1922 transfer from Cliftonville Ireland’s Saturday Night commented ‘…he does not believe in fiddling about his own goal with the ball: rather his first and main purpose is to clear from the danger zone by huge and healthy kicking…his speed is a great advantage…he does not give up all for lost if the ball passes him…has swift powers of recovery…’