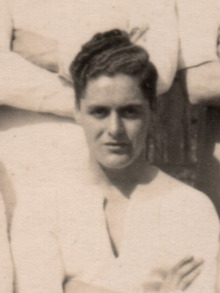 With at least nine clubs on his CV, the expression ‘much-travelled journeyman’ was most likely coined with a player like Owen McCahill in mind. However, Owen’s travelling was a little bit more exotic and more interesting than the majority of journeymen—his football passport had been stamped in five different National Leagues, Irish League, League of Ireland, Scottish League (Division 1 and 2), French League and the English League—and his registration with an Italian club had been refused!!

Owen’s first senior club was in his native Scotland with Second Division Two club King’s Park, joining them in December 1928. A year later he was with Glenavon, seeing out the 1929-30 year and he arrived in Dundalk in August 1930 at the same time as his Glenavon teammate, Gerry McCourt.

Playing at inside-right, his opening day two-goal salvo at the Athletic Grounds in a 7-3 demolition of League of Ireland newcomers Waterford. But his season was soured by an injury in a rough-house Shield game at Dolphin’s Barn, when Dundalk finished with just eight fit players.

As a result he did not command a regular first team spot until March, but in time to become involved in the season’s run-in when the club finished runner up in the FAI Cup to Shamrock Rovers after a replay.

He finished with runner up medals in both the League and the FAI Cup. Although offered terms for the following year he left and headed for St Mirren in the Scottish First Division League.

The formation of a new French National League in the 1932-33 season, which provided for a maximum of four foreign players per line-up, attracted a significant number of English and Scottish League players. Owen joined the exodus and ended up with Cercle Athletique de Paris (CA Paris) for two seasons. From middle table in the first year, CA Paris were relegated in 1933-34 after finishing in last spot and never again regained Division 1 status.

For the 1934-35 year Owen hooked up with Fulham, where he had to be content with reserve football. He fared only marginally better in the following year when with Millwall, getting just one first team game in a Third Division South Cup match.

After a period with Aston Villa Reserves in 1936-37 he was signed by an Italian club for the 1937-38 year but after a rumpus with the Italian authorities, concerned at the number of foreign imports, his registration was refused.

Instead of sunny Italy he ended up for his third spell in Ireland, playing at wing-half with Shelbourne in the 1937-38 year, but after half a dozen Shield games, one against his old club Dundalk in the season opener at Oriel Park, he was released. A Glasgow schoolboy’s representative player, he listed golf amongst his pastimes.

His continuing good early season form caught the eye of the man from the Dundalk Democrat ‘No cleverer footballer afield…I love to see his antics…sheer delight…the artist of the line’.