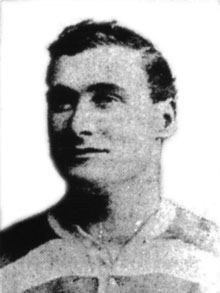 Big…ponderous…prodigious drives…deceptively quick…these were the characteristics of full back Fred Barrett, a soldier with the Holywood-based Norfolk Regiment, when he played with his regimental team in the Irish Alliance League during the first world war period. Belfast Celtic saw the potential and coaches Hugh McAlinden and Jimmy McGowan added the polish.

Under a headline ‘A Football Hercules’ the comment of Ireland’s Saturday Night was: “He may have been crude at first in some of the game’s essentials but after a time at Paradise improvement in his skills were noticeable.

For a man built in such ample proportions he was very fast and once won the 100 yards professional race at the Oval. But the great delight of spectators is to see him make those Herculean shots that are a terror to custodians.

Many goals has he scored from kicks within reasonable distance of the netted haven and if there was a competition as to which could kick the ball the farthest, one of his powerful left-footed drives would be few inches behind the winner.”

He soon became a first team regular and was the left-full in a legendary Celtic Park defence that won Celtic’s first Irish Cup in 1918 when they defeated arch-rivals Linfield—Willie McStay was Fred’s full-back partner and Elisha Scott was the goalkeeper.

Celtic legend Mickey Hamill claimed that Barrett was the best back he ever had playing behind him. In 1919 he was fullback on the Irish League team that drew 2-2 with the English League XI at Anfield.

Fred’s sending off in the Irish Cup semi-final against Glentoran on St Patrick’s Day 1920 was the signal for a crowd riot, shots were fired, many spectators were injured and the match abandoned.

Celtic withdrew from the Irish League at the end of that season and seven of their squad were transferred to English League clubs. Fred went to Chelsea, where he stayed for seven years, making 70 League and Cup appearances and scoring 6 goals. Noted for his long kicking, most of his goals came from set-pieces.

At the end of the 1926-27 season he wanted to return to Belfast Celtic, now restored to the Irish League, but terms could not be agreed with Chelsea who retained his registration. With the Free State League not recognised by the other British Isles Leagues, Fred accepted the invitation of Dundalk manager Joe McCleery, an old Celtic hand, to sign for Dundalk.

In his single season with Dundalk he was a sensation and his reputation as one of the strongest kickers of a dead ball of his era was fully justified—all of his 13 goals were from free kicks or penalties.

His cult status among Dundalk supporters was confirmed by his performance in the Cup against Shamrock Rovers. Two goals from free-kicks in a 3-3 result at Milltown, preceding a 4-1 home win in the Athletic Grounds replay, were spoken of for many years afterwards.

Club folklore had it that on one occasion he scored twice from free kicks in his own half of the field!!

One story was told of the time when the opposition keeper refused to stand his ground after a penalty had been awarded. His captain tried to persuade him, pleading reassuringly “There’s nothing to worry about, he won’t hit you.” The firm and quick retort was “he might, so I’m taking no chances!”

After playing one game with Dundalk at the beginning of the 1928-29 season and being released by Chelsea, his request to Dundalk for release was granted and he transferred to Ards, where it was reported that “his thunderbolt free-kicks threatened the physical well-being of opposition goalkeepers”.

For the following season he was appointed Ards player-coach but he became less effective as a defender as his pace deserted him and in the summer of 1930 he returned to Celtic, coaching their Seconds, and later became the groundsman at Celtic Park.

While with Ards he continued to cause panic and fear amongst the goalkeeping fraternity, most noticeably in the final of the 1929 Gold Cup when he took a free kick 5 yards outside the penalty box and hit the ball with such ferocity that it knocked out Linfield's Tommy Frame stone cold, crashed off the crossbar and landed back near the half-way line.

In two seasons with Ards he made 77 appearances and scored 8 goal, bringing his career appearances to 259 games, not counting his appearances during the three seasons 1915/16 to 1917/18 when Celtic played in the Intermediate league.

The parting comment of Ireland’s Saturday Night seems most appropriate: ’He will always be remembered at Celtic Park, Stamford Bridge, Dundalk and Castlereagh Park, Newtownards. When he is long past active participation in the game, his burly figure, his long drives and his fierce and accurate penalties will be long remembered.’