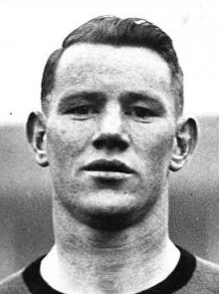 After a poor start to the 1934-35 season, with a high player turnover, two more new forwards arrived in November, both so-called ‘juniors’ from Northern Ireland—Craig ‘Gaughran’ a left-winger and on the right wing was Jim ‘Mills’. These names disguised their real identity—Willy Craig and Jim Mailey, both of whom were registered with clubs in Northern Ireland, playing in the Irish League on Saturday and turning out for Dundalk on Sunday.

With Billy O’Neill scoring regularly at centre forward and the inside positions held by Joey Donnelly and Gerry McCourt, the arrival of the two wingers helped to transform Dundalk’s season, culminating in qualification for the club’s second FAI Cup final, lost to Bohemians on a 4-3 score. En route to the final, ‘Mills’ scored the winner from a penalty in the second round win over Distillery and ‘Gaughran’ scored in the 2-0 semi-final victory over Sligo Rovers.

At the end of the year Jim Mailey signed legitimately for Dundalk and stayed for a further two seasons, switching to the left wing to accommodate Hugh Morgan. He played a leading role in another Cup final loss to Bohemians—and by the same 4-3 scoreline. In the closing game in the 1935-36 year Dundalk came up against the amateurs—that year’s League Champs—in the final of the City Cup and were 4 down at half-time. Mailey led a great recovery, scoring once and making two more, to a final 4-3 loss.

He was transferred to Fulham at the beginning of the 1936-37 season but returned home within weeks to add further to his collection of runner-up medals—after 3 seasons with Dundalk he had half a dozen. His second opportunity to sample English League football came with his transfer to Plymouth Argyle where, in the last two pre-War seasons, he made 15 Second Division League appearances and scored once. The War put paid to his last move to Swindon Town.

Before coming to make his Dundalk debut in November 1934 against Shamrock Rovers, Mailey had been playing in the Irish League with Ards who had picked him up from Carrickfergus junior football. He played a dozen games with Ards in the 1934-35 season, scoring three times, with his last match coming in late January but the game was up when the local Newtownards Chronicle blew his cover, dismissing supporters’ demands that he be played, adding ominously: “…we shall content ourselves by saying “It can’t be done”. If you want to know more ask the Ards officials. There is no use in the committee looking for trouble.”

During the war years Jim returned to play in Northern Ireland with the highly successful Bangor team, playing in the Intermediate League.

In its preview of the 1935 FAI Cup final the Dundalk Democrat described him as follows: “Learned his football up North and came here because we were short of a good thrusting forward. Full of guts, has plenty of speed, a good shot and tackles anything lighter than Slieve Gullion.”