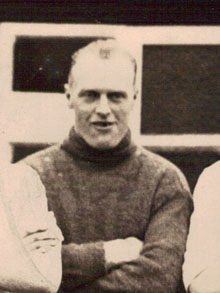 Goalkeeper Ben Lewis played his junior football with Picton Star in the local Merthyr League before moving to Aberaman in the Southern league. He was 28 years of age when he got his chance at English League football with Merthyr Town.

In four English League seasons, from 1926-27 to 1929-30, he made 43 League appearances, all with Merthyr Town except two in an eighteen month stint with First Division Portsmouth.

After a couple of seasons in non-league football with Bath City and Folkestone, he arrived in Dundalk in January 1932, from Bray Unknowns, to take the place of the injured Jack Hampton.

Affectionately known as ‘King Kong’, his performances for the remainder of the year attracted the attention of Linfield who offered him good terms for the following year.

However he elected to take Dundalk’s offer and in 1932-33 he was a key member of the club’s first League-winning squad, appearing in all 42 games this season.

He played a central role in confining the goals conceded to just 21 in the 18-game League programme and in the second half of the season he added a Shield runner up medal to his Championship honour.

Following another active season at the Athletic Grounds, he headed for Glentoran in May 1934, and in the following year, with former Dundalk colleague Gordon McDiarmid at full back, he added an Irish Cup medal to his collection, after Glentoran defeated Larne in a second replay. Over two seasons he made 66 appearances with Glentoran. He finished his career with Nargs.

In its player review of the Championship-winning season Dundalk Democrat described him as “easily the most outstanding goalkeeper in the Free State.”