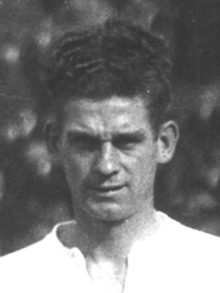 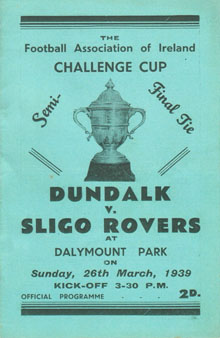 After the annual pre-season trial at Oriel Park in August 1941 the Democrat, commenting on the absence of Henry Hurst for the first time in 12 years, noted: “The place seemed strange without him.”

For eleven seasons, since his debut on the left wing in a League game against Cork at the Athletic Grounds on November 9th 1930, he had been at the heart of Dundalk FC.

For the second half of his first season he was on every team sheet, barring injury, playing at inside right with Joey Donnelly as his wing partner and at season end he appeared in his first of two FAI Cup finals, losing out in a replay to Shamrock Rovers—he had a similar experience in the 1935 Final, this time failing to Bohemians by 4-3.

Before that he had been converted to a left half for the 1932-33 year, when, with right half Sam Patton, he provided the midfield powerhouse for the historic first League Pennant success.

For the rest of his career very few Dundalk teams lined out without Henry, and only rarely was he not in the number 6 shirt. Dicky Lunn took the left half position for the 37-38 year and Henry, a season long standby for two Internationals, Dicky and left full Mick Hoy, missed out on a third FAI Cup runner up medal.

His record in competition cup finals is unparalleled—after being on the successful Presidents Cup team in 1931, he was on the losing side in nine finals, spread over ten seasons: 2 FAI Cup, 2 City Cup, 4 Leinster Cup and 1 Presidents Cup. Adding his two League second spots and another one in the Shield, his collection of runner up mementoes amounted to the even dozen.

During this period the only club success in a competition cup final was the 1937-38 City Cup win and after playing in all the earlier rounds an injury prevented Henry from playing in the 2-1 final win over Cork! On his retirement he set a new club record for appearances and his testimonial, against Shamrock Rovers, came at the end of the 1940-41 year.

He was recruited in his teens by Steve Wright to came to Dundalk from Nuneaton Town, worked in the GNR and later the Dundalk Textile Company, married a local girl Kathleen Prendergast and spent the rest of his life locally until his death in August 1979, aged 69.

In 2010 he was inducted into the Dundalk Hall of Fame.

Dundalk Democrat’s pen-pic following the 1933 Championship victory:- “Long-legged and possesses an awkward style…has a great left hook… lands the ball in the right place every time…heads wonderfully…a hard forager…always in the thick of the struggle… plays till he falls …. A gentleman on the field and off.”