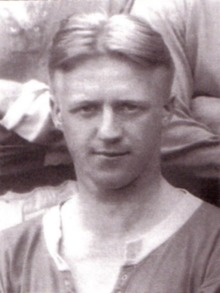 Tall blond centre-half ‘Snowy’ Harrison was just 18 years of age when he had his first English League spell with Wigan Borough in the Third Division North, playing 6 League games before drifting back into non-league football with Atherton Colliery and Chorley.

Four years elapsed before he got his second chance and he had four English League seasons under his belt—two each with Notts Forest and Leicester City and a total of 109 English League games—when City released him in May 1931.

Dundalk manager, Leicester-born Steve Wright, was quickly off the mark and by May 23rd Albert had made his Dundalk debut, in the drawn President’s Cup final against Shamrock Rovers, the last match of the season. While with Notts Forest he had been chosen for the FA team that toured South Africa in 1929, playing in one of the test matches.

Near misses in the League and FAI Cup during the 1930-31 season, coupled with increased gates, provided the club with the resources to sign up an impressive list of imports for the 1931-32 season—Jack Hampton (Preston), Andy McCluggage (Burnley), Jimmy Bullock (Manchester United), Joe Cassidy (Celtic) and Albert. But, not for the last time, star names brought financial trouble, not trophies.

Harrison was the exception and 25 years after he had left the club his outstanding performances in the 1931-32 season earned him the 1956 supporters’ vote at centre-half on the ‘Best Ever Dundalk XI’.

It was acknowledged at the end of a disappointing season that were it not for financial constraints he and Jack Hampton would have been retained.

The season’s highlight came in the third match when the club annexed its first trophy, defeating Shamrock Rovers in the replayed final of the previous year’s President’s Cup. Snowy moved to Drumcondra for a year before returning home for a second term with Wigan (now known as Wigan Athletic). He finished his playing career with a spell at Swiss club Legano.