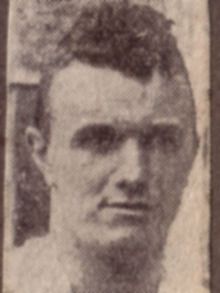 By the time Welshman Stanley ‘Danner’ Griffiths came to Dundalk in the summer of 1937 his CV consisted almost entirely of reserve and non-league football. He had spent four seasons with three different English League clubs—Cardiff City, Chester, Gillingham (4 appearances) and in 1934 a return to Cardiff (2 apps)—and clocked up just 6 English League appearances, with two goals to his name. Before coming to Ireland he had spent a while with Bangor City in the Birmingham and District League and with Folkestone.

He lined out for Dundalk on the left wing in every game in the 1937-38 year; he and Charlie Tizard were the only ever-presents. Making his club debut in the opening day fixture—a Dublin City Cup tie against Shelbourne at Oriel Park—he celebrated with a goal in a 3-2 victory. Three weeks into the new season he had a winner’s medal after the club had triumphed in the final of the Dublin City Cup, after losing out on the last day in the two previous seasons, and annexing the first trophy to reside at Oriel Park.

Stanley’s medal collection doubled before the season was finished but unfortunately it was of the runner-up variety when Dundalk lost in the final of the FAI Cup, its third loss during the 1930s, when going down in the final by 2-1 to St James’s Gate. His medal tally could have been better still—only two points separated the club from League Champions Shamrock Rovers in the final League table.

In a season which saw some exciting talent arriving in Oriel Park—Mick Hoy, Dicky Lunn, Jimmy McArdle, Bob Maloney —Danner and right-winger McArdle were the main suppliers to Joey Donnelly in Joey’s most goal productive season, leading the scorers’ chart with 24 hits. Danner was no slouch at the goalscoring, knocking in ten for the season.

His next port of call was Grantham in the Midland League before the war virtually stopped all sports activity. He was discharged from the Army on medical grounds, arising from football-related cartilage problems and went to work at HMS Dockyard in Chatham Medway, staying there until he retired.

Born at Pentre in the Rhonnda Valley, he maintained his football interests, helping out at his local club in the late 1940s, spending time as trainer with Gillingham and also acting as scout to Sheffield Wednesday. In his nineties when he died in 2003, he spent his later years with his family in France.