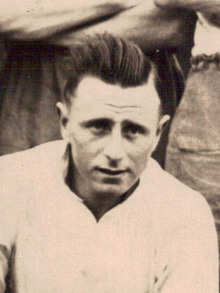 Like his brother Tommy, Gerry was a product of local nursery St Patricks. The departure of a number of the 1933 League championship winning squad saw Gerry lining out at inside right for the opening fixtures of the 1933-34 year, with Tommy at centre forward.

They were joined by other locals from the Dundalk Junior League with James Brannigan (left fullback) and Joe McCann (outside right) also becoming early season regulars. After the arrival of Billy Delea and Jack Atkins, Gerry was moved to his favourite right half slot and Tommy reverted to centre half.

Gerry’s debut season performances earned him permanent possession of the right-half spot for the 1934-35 year in a half back line of brother Tommy at centre half and Henry Hurst at left half that provided the driving force behind the club’s qualification for its second FAI Cup final.

Early defensive lapses in the 1935 final against Bohemians proved crucial but there were excellent individual performances from Billy O’Neill and the Godwin brothers. Gerry later turned out with Dolphin.