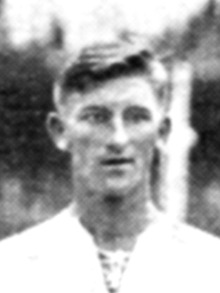 A prominent player with leading junior club St Patricks, Steve was capped at Junior International level against Scotland in 1938. After a period with Dundalk reserves he got his first team call-up for the opening game of the 1938-39 season playing at right-half and failed to start in only five games, all at season end.

During the later stages of the League and for the FAI Cup he was moved to inside-right –but it was a frustrating season. Defeats in the semi-final of both FAI Cup and City Cup and in the final of the Leinster Cup, were compounded when a last day draw in the League saw the club squeezed out of the League runner-up spot on goal average.

With Billy O’Neill and Mick Hoy as full-backs, Tom Crawley took the right-half spot for the 1939-40 year, with Steve lining out at centre-half, but his appearances, all early season, were limited to acting as cover for Henry Hurst.