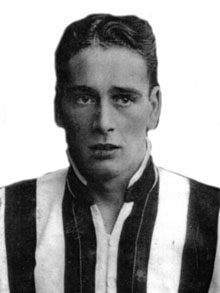 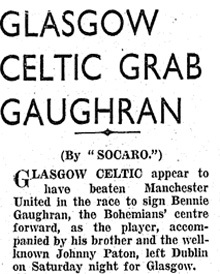 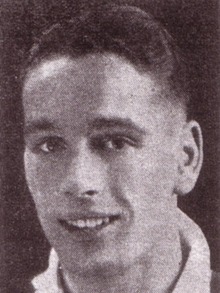 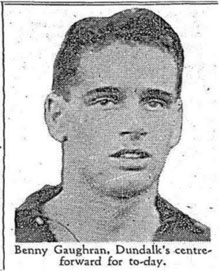 The 1935-36 Championship-winning Bohemians team is acknowledged as amongst the amateurs’ greatest ever squads, and included club greats Harry Cannon, Plev Ellis, Fred Horlacher and Billy Jordan. The scoring fireworks were supplied by the 20-year-old new comer centre-forward Benny Gaughran in his debut season, scoring 16 goals in the League campaign and a total of 32 in 39 competitive games.

As well as the League title Bohemians also won the City Cup, defeating Dundalk 4-3 in the May 1936 final. Before leaving the Amateurs in the following season he helped them to a tie in the Shield with Waterford—scoring 7 times in 10 appearances—but he wasn’t around when Waterford prevailed in the play-off in late November.

On a scouting mission to Dublin in May 1936, Tom Parker, manager of Norwich City, took note of him as one to watch. By the following November he had been transferred to Glasgow Celtic. Released by Celtic at the end of the season, Parker, now manager of Second Division Southampton, took him to the Dell.

A brief but spectacular spell, in which he scored 4 goals in 7 appearances, brought a £1,000 bid from First Division Sunderland and a couple of months after his arrival, Southampton had made a tidy profit. By the end of the season he was on the move again (after two Sunderland League appearances), this time to Division 3 South Notts County, where he was standby for the injury-prone Dixie Dean. With County he made 2 League appearances, scoring 1 goal in 1938-39, the last pre-war season.

On his return to Ireland Dundalk beat off stiff opposition for his signature and by the middle of January sat on top of the League. But an inexplicable loss of form in the middle of a financial squeeze, aggravated by a first round Cup defeat by non-league Distillery, culminated in most of the high-earners being despatched to other clubs within a week of the Cup loss. Benny ended up at Portadown.

He was Dundalk’s leading scorer and had a purple patch in November scoring in 5 successive games, netting 9 goals in the spell.

Benny made his Portadown debut at The Oval against Glentoran on 10th Feb, 1940. A large number of Dundalk fans attended that game as two more of the Dundalk exiles, Billy O’Neill and Charlie Tizard, were making their debut for Glentoran that day as well. In the final part of the 1939/40 season Benny played a total of 13 games for The Ports scoring 16 goals, including 5 in a 7-2 March win against Larne.

In the 1940/41 season he played in 40 of The Ports 42 games, scoring a total of 42 goals, which was at that time a Portadown record season total. His haul included another 5-goal game in an 8-0 victory against Cliftonville on 7th Dec, 1940, as well as four hat-tricks.

In that season his partnership with right-winger Davy Cochrane produced 72 goals and galvanised the Portadown attack to a League goal haul of 92 from 27 games as they chased Belfast Celtic the whole way to the line for the title, finishing a close second.

On two occasions both players scored a hat-trick in the same game. He finished the year in style, scoring in eight consecutive matches between 29th March and 10th May. The Ports dropped out of the Regional League at the end of that season due to the constraints of the War.

Returning to the League of Ireland for the 1941-42 season, he lined out with St James’s Gate but injuries limited his appearances to 19. He scored 10 goals with the Gate, and finished the year guesting with Distillery in the Inter City Cup.

His single match for Distillery was in May 1942 in the Inter City Cup second leg tie against Dundalk at Dalymount Park when the Distillery team left the field at the end of normal time, after the teams had drawn 2-2, and refused to play extra time in protest at the referee’s time keeping! The referee started the extra time with only the Dundalk players on the field and after running the ball into the empty ‘Distillery’ goal he declared Dundalk the winners. Two weeks later Dundalk became the competition’s inaugural victors when defeating Shamrock Rovers in the final.

In his final playing season he did not appear until January ’43, turning out with Shamrock Rovers for just one game (a 1-1 draw against Champions-elect Cork) and he finished the season and his career with Brideville, scoring once in five appearances. Appropriately his last League of Ireland game, on April 3rd 1943, was against Bohemians.

Benny’s football career started as a youth with the Dublin Gaelic club St Laurence O’Tooles before switching to rugby with O’Connell Schools where after losing to Blackrock School in the 1932 Schools Junior Cup final, playing at full-back, he earned a schools’ junior interprovincial cap for Leinster against Connaught.

The legendary Bohemian’s trainer Charlie Harris spotted him playing casual soccer at Fairview Park and convinced him to make another code switch. A few games in the Leinster Senior League with the Boh’s Reserves led to his first team debut in September 1935 in a Shield match against Waterford.

Before signing for Celtic in November 1936, a League of Ireland haul of 41 goals from 51 appearances had a queue of English League clubs seeking Bohemian’s permission to talk to him, including Manchester United, Arsenal and Wolverhampton Wanderers.

After he had signed for Celtic in preference to Manchester United, the disappointed United chief scout, the legendary Louis Rocca, asked Benny if there were any other players that he could go to watch so as not to waste his boat fare! Benny recommended Johnny Carey, then with Home Farm. Days after Benny had signed for Celtic, Johnny Carey was on his way to Old Trafford for a fee of £250. The rest is history.

When his playing days ended he joined the Civil Service, working in the Department of Agriculture until his death.

His son, also Benny, was born in Dublin and grew up in Dundalk. He was educated at De La Salle School Dundalk, studied Law at UCD, graduating with a BCL and qualified as a solicitor. He later obtained a Diploma in Biblical Studies & Theology from TCD. He is an Accredited Mediator, a member of the UK Law Society and set up his own law practice in 1979.

He played soccer with St Josephs and Bank Rovers in the local Dundalk Leagues while also playing Gaelic with Clann Na nGael and eventually he gave precedence to Gaelic football.

For over twenty years Benny played County Football for Louth and in 1976 was selected County Player of the Year. He won an All-Ireland Club medal with UCD, 3 Dublin Championship medals, a National League medal, a Railway Cup medal, a Sigerson’s medal (as captain) and many other honours.

He was also selected on numerous occasions for the combined universities’ teams, the Leinster Railway Cup team and received several All Star nominations. An ace scorer like his father, he was in the top three on the Co Louth scoring charts for ten consecutive years. A keen golfer, he maintains an active interest in all sport.