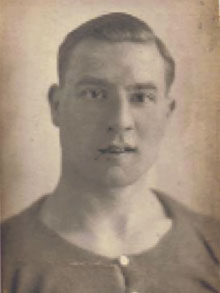 A 2-0 League loss to Shamrock Rovers at the Athletic Grounds at the end of September 1932 in the seventh League game by League leaders Dundalk was the first defeat in the 1932-33 season and showed up some frailty at the heart of the defence.

Manager Stephen Wright immediately signed Barney Duffy from Shelbourne for the centre half slot. He was the second Scot to be signed inside the space of a week—he and Mick Burke made their League debuts against Cork Bohemians in early October.

By Christmastime club supporters were celebrating the first League Championship triumph to come to Dundalk, and the first time the Pennant had left Dublin.

Barney Duffy’s sure tackling and determination, complementing the driving wing-half play of Sam Patton and Henry Hurst, had played a central role in the campaign—there was only one further League loss after his arrival.

In the second half of the season Barney added a runner-up Shield medal to his Championship gold. He missed just one game from his early October arrival.

Born in a mining town, his junior football had been with Glasgow nursery Bellshill Athletic, from where he transferred in June 1923 to Chelsea.

A very dependable member of the Chelsea Reserves, he made only three first team appearances in his four seasons at Stamford Bridge, failing to dislodge fellow-Scotsman Jock Priestly from the Pensioner’s midfield.

His uncompromising style of play earned him the dressing room name of ‘dirty Barney Duffy’. The game was much more physical in the 1920s and for defenders survival meant taking no prisoners.

He finally decamped from Stamford to Clapton Orient in March 1927, in time to make 12 League appearances before the season closed.

The wing-half joined the O`s in March 1927, proving to be a really tough character who never shirked a tackle. In fact, his biting tackle was probably his main asset. His forceful play was a big factor in Orient escaping relegation in 1926/27 and 1927/28, but when they were finally relegated to the third division (South) in 1928/29, he moved on. Duffy was a bustling player with a hard tackle, who would have performed very well in recent years when individual ball skills seemed to become of secondary importance.

With the Second Division Orient he made 70 League (1 gl) and 4 FA Cup appearances over a three-season period. Before his Shelbourne spell he had played in the Irish League with Ards in the 1930-31 term, where his old Chelsea team mate, Fred Barrett, was player-coach.

At Castlereagh Park he got his name on the score sheet on three occasions and made his contribution to a sixth place in the league, the best finish for some years. In the semi-final of the County Antrim Shield against Cliftonville Barney was sent off for the second time in as many months and was released at the end of the season.

With Shelbourne in the 1931-32 year he was an ever-present during the League (18 apps) and Cup (3 apps) but Shamrock Rovers took all the main honours, finishing with the treble of League, Shield and Cup. Shels made it to the final of the Leinster Cup but Dolphins got the better of them by 3-0 in the St Stephen’s Day final.

Dundalk was his last professional club and when his playing days were over Barney returned to Scotland, where he worked for a Hamilton bookmaker. He was one of a syndicate of "runners" who took bets from the punters at the local greyhound track and he regularly hired his fatherless nephews to run with the bets at the track.

As a result of research undertaken by his Boston-based granddaughter, Maureen Rooney, Barney’s Chelsea career was featured in the Chelsea-Manchester City match programme in March 2010. The renowned film composer Patrick Doyle is a member of the extended Duffy family.

In his later years Barney became a regular at Celtic games, both home and away, and attended the ‘Lisbon Lions’ legendary European Cup victory in 1967.

In its player review of the Championship-winning squad the Dundalk Democrat noted: He came here after the shallow defeat by Shamrock Rovers in the first half of the season. Has been of great value as a centre-half, where his strength and determination will often turn the balance in our favour.