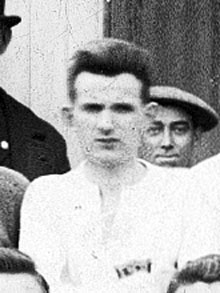 Ex-Larne and Ballyclare Comrades Jimmy Agnew played at outside left in the opening game of the 1928-29 season and following a 4-2 loss to St James’s Gate was replaced. He was one of six different left- wingers who were tried until the arrival of Bob Egan in late November for a visit to Brideville, when Jimmy was switched to the right wing to replace the injured Jimmy Withers.

For the remainder of the season Egan and Agnew filled the wing spots and Jimmy chipped in six goals. He played in all seven Leinster Cup games, scoring in four of them, earning the club’s first competition final, lost to Shamrock Rovers after a replay. At the end of the season he lined out with Belfast Celtic.

His second season appearances were limited to a single Shield game when he deputised for the injured Jack Berry in a March 1930 clash with Shamrock Rovers, scoring the only goal in a 1-0 victory at the Athletic Grounds.