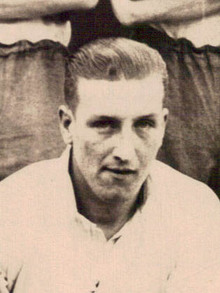 Billy Delea played centre forward with Munster Senior League kingpins Cork Bohemians, whose late 1920s exploits in the Intermediate and Munster Senior Cups had earned them a number of FAI Cup entries—Billy had just turned 19 when he scored for them at the Mardyke in a 2-1 loss to Dundalk during the 1929-30 campaign.

In the following year’s FAI Cup he scored against Drumcondra in the first round and again was on the score sheet when the Cork team travelled to the Athletic Grounds, going under by 2-1 to a Dundalk team that qualified for its first cup final, losing to Shamrock Rovers in a replay.

There was a major re-shuffle of the League in advance of the 1932-33 year. Brideville and Jacobs were not re-elected, and before the season started Waterford resigned from the League. The Cork amateur club was elected in their place—but it turned out to be no bed of roses. Billy was their leading League goal scorer (12 goals) but financial difficulties forced cutbacks and before the season ended Billy was transferred to Third Division Southport.

He scored twice on his Southport debut in March 1933 and finished the year with 7 appearances and 3 goals, but after an ankle injury, suffered in his last game, he was released and returned to Cork Bohs for the 1933-34 year.

However Bohemians’ troubles continued and by November he was with Dundalk, displacing Eddie Carroll at centre forward who went to the right wing. He maintained his fine FAI Cup scoring record with goals against Sligo and Cork—in the period 1930 to 1934 he recorded scores in 7 Cup ties.

After a year he returned to England becoming player-manager at Fords Motor Company where he was employed until his retirement in 1973.

Southport Whos Who “The Sandgrounders”, Geoff Wilde and Michael Brahim....A bustling kind of attack leader, he never ceased to harass the opposing defence."