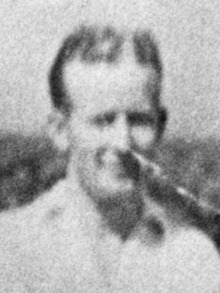 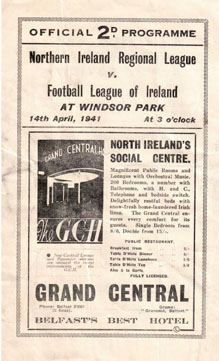 Full back Tom Crawley progressed from the local under age Leagues with Quay Celtic (under 16) and Market Street (under 18), through to the Dundalk and District Junior League also with Market St. and finally to Dundalk Reserves in the 1937-38 year.

In that season he was called upon four times for first team action, covering both fullback positions in the absences on International duty of Billy O’Neill and Mick Hoy.

His back up duties were extended in the following year and he became a full scale utility player—as well as providing cover for both full back spots, he played outside left for the injured Wagger Byrne, left half when Dicky Lunn was not available, appeared once at centre forward for the missing Jimmy McArdle and he finished out the season at right half.

His performances in a hectic season end (8 games in 22 days) prompted the Democrat to predict, “He would soon become a regular first teamer.”

With O’Neill and Hoy still holding down the full back spots, Tom was assigned the right half jersey for the 1939-40 year but the departure of O’Neill and Hoy after the disastrous FAI Cup defeat by non-league Distillery finally gave Tom the opportunity for an extended run at full back, where he remained for the rest of his Dundalk career.

O’Neill returned the following year and one of the club’s most illustrious fullback partnerships was in place, one which would form the defence bulwark for the club’s first FAI Cup success in 1942.

Before that, Tom’s performances were recognised by the League of Ireland selectors’ in April 1941 for the annual fixture against the Irish League.

As the result of an injury suffered in the FAI Cup final, Tom did not participate in the Inter City Cup triumph and his 1942-43 season ended with another Cup match injury, this time in the first leg tie against St James’s Gate.

He was an ever present for the 1943-44 season until a serious injury in a January League game against Shamrock Rovers ended his playing career—shortly afterwards Billy O’Neill also played his last match with the club.

The Football League team included four of Matt Busby’s Manchester United Babes, all involved in the Munich disaster—Roger Byrne, Duncan Edwards, Tommy Taylor and Denis Viollet, the only survivor of the disaster.

He was acting as linesman at Oriel Park for the first round FAI Cup tie against St Patrick’s Athletic in 1952 when Dundalk’s 3-2 win was thanks to the unsighted English referee’s failure to spot local keeper Walter Durkan, after a goalmouth scramble, scoop the ball back into play from some three feet over the line!

Before the game the Liverpool referee had issued specific instructions to the linesmen to concern themselves only with throw-ins and corner-kicks. Tom did as he was instructed and Dundalk went on to win the Cup!!

Tom is remembered for his dual roles, as player and official. As a tough, skilfull full-back, and as a member of one of the club’s most famous full-back lines along with Billy O’Neill, he played a key role in the capture of the club’s first FAI cup in 1942. In the Summer League and the League of Ireland, whether as linesman or referee, he earned respect as a fair no-nonsense match official.

“Stars of the Summer League” by Robbie Rafferty described Tom as follows: “He will be long remembered by legions of Dundalk fans and Summer League players as a tough skilful full-back and a no-nonsense referee and as a member of one of the club’s most famous full-back lines, along with the equally great Billy O’Neill, during the forties.”