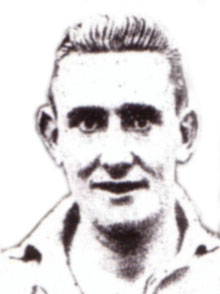 Born in Lurgan, inside forward Jim Cassidy was transferred from Newry Town to First Division Manchester City for a reputed fee of £1,200 in October 1935, and only 3 League appearances in his two seasons at Maine Road was not good value for money. City were not complaining—Jim was a standby during their march to the First Division League title in 1936-37.

A move to 3rd Division Tranmere Rovers for the 1937-38 season proved much more productive and rewarding for Jim. Alternating between both inside forward positions behind goal-scoring machine and local hero Pongo Waring, he made 27 League appearances (and scored 6 goals) in Tranmere’s Division Three victory.

But they survived only one season in Division 2—their 6 wins from 42 games was the worst ever recorded by any Division 2 team. Jim made 24 appearances and contributed 3 goals.

He came to Oriel Park for the 1939-40 season, where he played mainly at right-half, and experienced further disaster. A mid-season financial crisis, aggravated by a first round FAI Cup home loss to non-league opposition, led to the departure of half the team in early February.

To complete a season of misery, a promising League position was frittered away, thanks to three final game losses. Jim departed at the end of the season and spent the following year with Limerick.

He had come under scrutiny in 1932-33 for his performances with Lurgan junior side Sunnyside, winners of the First Division Alliance title. But after a half dozen games with his local Irish League team Glenavon he was released. A utility man and a skilled schemer, his accurate passing created scoring opportunities for his teammates and the chance to show his capability came when he joined Newry Town.

He became a Newry ever-present and on the occasion of his last match before transferring to Manchester City he was making his 100th consecutive club appearance. .