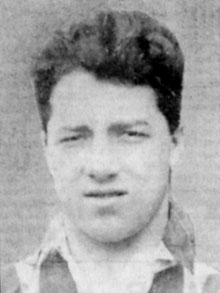 At 5ft 9in. Jimmy Bullock was a bit on the short side for a centre forward but he had the knack for scoring goals and exceptionally dangerous in the air. After short spells at Crewe Alexandra and Manchester City, he spent 5 seasons with Southampton. He was a goal-scoring phenomenon with the Saints Reserve team, setting a mark that has never been threatened since—166 goals in 208 games. But his first team opportunities were limited—competing with English International Bill Rawlings.

After a dispute about a testimonial he left for Chesterfield in 1929, with a Saints League record of 13 goals from 32 games. A first team regular with Chesterfield in the 1929-30 season, he grabbed the opportunity and 30 goals (including 4 hat-tricks) in 39 games attracted the attention of the big clubs. He accomplished that rarity of hitting hat tricks against the same opponents (Darlington) in both the home and away fixtures.

There was uproar in Chesterfield when he was transferred to Manchester United in September 1930 for a fee of £1250. Ironically, Chesterfield went on to become Div 3 (Northern) Champions—his new club were demoted to the Second Division.

Jimmy’s goal-scoring touch had deserted him at Old Trafford. In 10 appearances he scored just three goals—a hat-trick against Leicester when the Reds lost 5-4! At the season’s end he was transfer-listed at £1000, but there were no takers and under the ‘open-door’ system he headed for Dundalk in the League of Ireland.

In spite of scoring in the opening game of the season, in a 2-0 win over St James’s Gate, this did not turn out to a good move either. The goals failed to come, and not playing well, ‘in a remarkable display of sportsmanship’ (according to Tempest’s Annual) he voluntarily cancelled his contract and by November had returned to England.

However, Jimmy had not said goodbye to either Ireland or goal scoring. In the following season he helped Llanelli to win the Welsh League, scoring 43 goals, and played for the Welsh League against the League of Ireland at Dalymount Park in September 1932. Former Dundalk colleague Sam Patton was on the home team that won 2-0. Jimmy had a later spell with Manchester club Hyde United in the Cheshire League.

From Southampton Whos Who ‘The Alphabet of the Saints “ While his spell with Southampton was overshadowed by English centre-forward Bill Rawlings but, whenever called upon, always performed creditably as figures of 13 goals in 33 appearances suggests. And his reserve scoring rate was staggering.