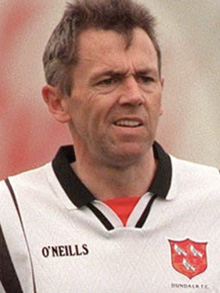 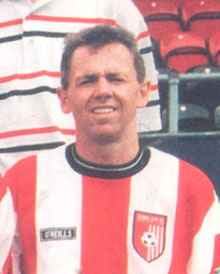 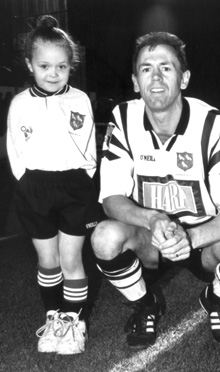 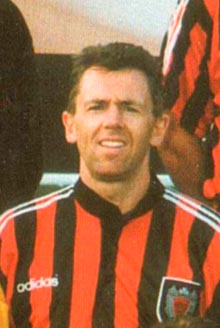 Although he was 35 years old when he came to Oriel Park for the 1997-98 year, it was clear that he had deserved his reputation as the best left-back in Ireland, with a trophy cabinet to match. A superb reader of the game, it was no surprise that Jim McLaughlin had secured him to take control of the centre of Dundalk’s defence.

Under Jim at Shamrock Rovers, Brady had landed four League titles and three FAI Cup medals and had been the mainstay of the LOI defence in the 1988 Olympics qualifying campaign, starting in seven of the eight ties.

At Derry there was a League-Cup-League Cup treble under McLaughlin who was also in the back room staff for Brady’s stint with Shelbourne that delivered a League Championship (1991-92) and another FAI Cup (1993 against Dundalk). This brought his major trophy collection to 6 Premier divisions and 5 FAI Cups.

A stint with Ards in the Irish League brought further honours. Appointed skipper for the 1994-95 year, he landed the League Cup and picked up the club’s ‘Player of the Year’ Award. For the next two seasons he was with Bohemians, helping them to runner up spots in 1995-96 (to St Patrick’s Ath.) and in 1996-97 to Derry City. He opened the 1997-98 year with Derry City—playing in the Champions Cup ties against Maribor Teatanic.

He played a key role in steering Dundalk to a safe mid table position in his first season but could do little to solve the financial problems that bedevilled his second term and that culminated in the club’s demotion to the First Division. Kevin retired at the end of the season with League appearance records as follows: National League 360(6); Irish League 23(1).