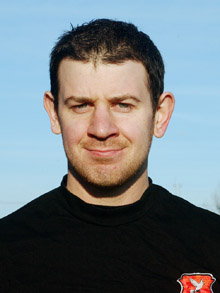 The best player ever to come from Blackrock?

David Ward was thrust into the first team towards the end of the 1996-97 season when Eddie May gambled on the youngster on the 20th April 1997 (the same match that David Hoey made his first league start). The match ended in a heavy 4-0 defeat to Cork.

Ward started the 1997/98 season on the bench and scored his first Dundalk goal in a 5-0 win the League Cup against Drogheda United after coming on as a substitute. He made a number of substitute appearances throughout the season but eventually was put into the first team towards the end of the season in a 4-2 defeat away to St Patrick’s Athletic.

The game from this period that lives in the memory is the live televised match on 1st May 1998 when Shelbourne came to Oriel Park looking for a point to win the title. David produced a sparking display and opened the scoring as Dundalk defeated Damien Richardson’s team to deny them the title.

Virtually ever-present in the disappointing 1998/99 season that culminated in Dundalk’s relegation but he played a major role in Dundalk’s return to the Premier Division in the 2000/2001 season. Often played either as a striker or as a left-sided attacker, his 11 goals complemented Martin Reilly’s 21 in the march to the First division title.

He also scored crucial goals such as a winner in Waterford and a vital equaliser in a 2-1 win in Whitehall against Home Farm. Dundalk finally sealed promotion with a 2-1 win over close rivals Athlone Town in which Ward played a leading role.

In the 2001/02 season he scored Dundalk’s first goal back in the Premier Division when he equalised against UCD. However, he was to score just one more goal in a 3-1 win over Bohs before playing his last game in a 3-0 home defeat to Bray Wanderers. Following that match, Martin Murray rang the changes and sent him on loan to Newry Town, thus missing out on the pain of relegation and ecstasy of the FAI Cup win.

He returned to the club for the start of the 2002/03 season in the First Division. The two goals he scored on the 4th September 2003 in a 2-1 win over Monaghan United were to be his last for the club. A few weeks later, against Finn Harps at Oriel Park, he suffered a bad injury and it was almost a year before he returned. His last appearance came in the final game of the 2004 season away to Finn Harps.

In January he signed for Ards and later had a spell with Armagh City.

He did come back to Oriel Park in 2009 but an administration problem prevented Sean Connor from completing his signing despite Ward impressing in the pre-season Jim Malone Cup match.