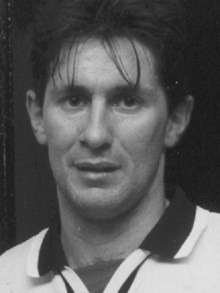 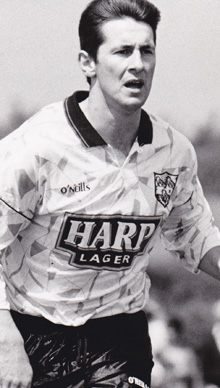 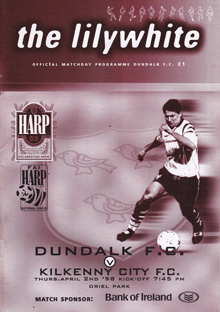 Brian started with Dublin Schoolboys Club Lourdes Celtic, collecting plenty of Schoolboy and Under-age acclaim, including International honours. He and Jason Byrne went to Huddersfield, but injuries shortened his cross-channel career and he returned to play with Drogheda.

After playing in the five opening League games of the 1992-93 season, and the collapse of a deal that would have brought him to South Africa, he drifted back to non-League football, initially with Wayside Celtic.

He was with Glenmore Celtic in August 1994, when Dermot Keely was alerted by St James’s Gate manager, Pat Byrne, that the talented left-winger was being wasted in the Leinster League. Keely took the advice and added another piece to his Championship-winning squad. Although finding it tough to establish himself early in the season—he was a substitute who was himself substituted in the season opener against Bohemians—he soon made the no. 11 jersey his own.

A single home defeat laid the foundations for the club’s ninth Championship Pennant and Brian’s streaking runs, cleverness and ball control at pace were key ingredients in the victory.

His Championship strikes included a goal against St Patrick’s Athletic in November that had all the ‘what happened next’ elements about it. When the opposition keeper decided to add his presence to the Dundalk penalty area for a corner kick in the last minute, leaving an unprotected goal, his (failed) attempt to catch Byrne after chasing him the length of the field has been captured on film: check it out on Youtube—google Brian Byrne Dundalk FC.

He finished the 1997-98 year as leading scorer with 16 goals and his contribution to Dundalk’s early season 8-match unbeaten League run earned him the Soccer Writers Player of the Month Award in October 1997.

One of the most exciting players in the League, he was capped in 1996 on four occasions by the National League team that included a couple of games on the team’s USA tour.

Injuries restricted his fifth and last Oriel Park term and he afterwards spent a couple of seasons with Shamrock Rovers before a move to Shelbourne for the 2001-02 season. This brought him another Premier Division Championship medal after the Reds’ disputed win over St Patrick’s Athletic following a registration debacle that saw the title determined in the wake of court action and arbitration.

Brian finished his career with Longford Town, retiring at the end of the 2004 season.

Terry Conlon in the Argus: “Man of the Match Byrne whose quick arrival at the top and who twelve months previously was playing in the Leinster League, was holding a winner’s medal at the end of his first senior season. His emergence as a quality flank player was one of the key reasons for the club’s success.”