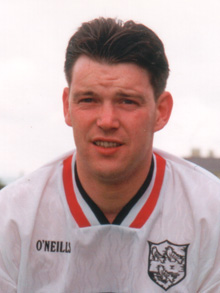 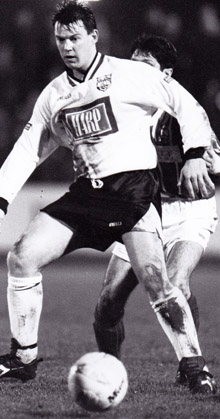 Brian Irwin arrived at Dundalk in the summer of 1991 with a point to prove having being released by Barnsley after just six months. He had also spent time with Home Farm and with Kilkenny City. But he had shown at Schoolboys level and then in a FAI/FAS course on his return that he had the talent to make an impact in the LOI.

After he was signed by Turlough O’Connor he made his club debut on the 18 August 1991, the first competitive match of the ‘91/92 season, when League champions Dundalk travelled to St Mel’s Park Park in the League Cup, starting up front alongside Peter Hanrahan. He failed to score in a 4-0 victory but a week later he scored his first goal for Dundalk when he came on a sub and scored in a 3-0 win over Monaghan United.

He eventually kept his place, scored twice in a 2-1 win at Athlone Town and showed his true class on the 20 October when he scored a treble in a 4-0 home win over Bray Wanderers.

He remained an important part of the squad during ‘92/93 and was in the starting line-up of the 1993 FAI Cup final that ended in a 1-0 defeat to Shelbourne. Injury and poor form saw him drop out of the team in the early stages of the ‘93/94 season but new manager Dermot Keely recalled him to the line-up and was rewarded when he scored goals against Cobh Ramblers and Derry City as Dundalk made a late attempt to qualify for the ‘Top 6’ split.

Irwin started the ‘94/95 season as Warren Patmore’s front-line partner and was one of a number of strikers utilised in the Championship-winning season. His League stats that season—12 starts, 4 subs and 3 goals—earned him a Championship memento. He made his final start for Dundalk in the Leinster Senior Cup final defeat to UCD on 7 February 1995.

After leaving Dundalk, he went to Galway United before being signed by Martin Lawlor for the 1997-98 season at just-promoted Drogheda United but the Drogs maintained their Yo-yo league record by finishing a long way last in the Premier Division and dropping straight back down to Division One.

Dundalk fans may remember a match on the 23 October 1997 when, with five minutes remaining and the scoreline 0-0, David Crawley sent a hopeful cross into the box in a Louth Derby at Oriel Park. Eddie van Boxtel in the Drogheda United goal pushed the ball into his own net to give Dundalk what appeared to be a 1-0 win. However, Irwin reminded Dundalk fans of his talent when he scored a tremendous goal in the final seconds to rescue a point.

By the end of the 1990s, Irwin was making a name for himself playing GAA for his local team Portmarnock and he spent some time on the County Dublin panel. He also had a spell with Bangor in the Irish League.