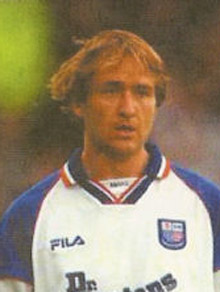 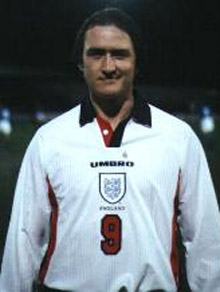 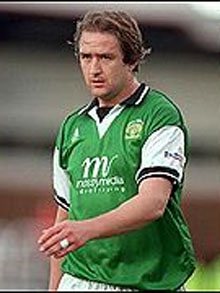 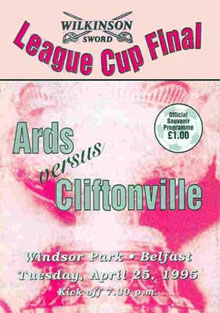 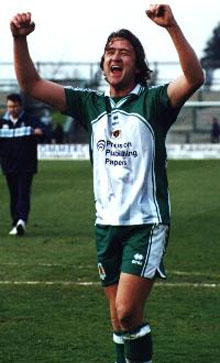 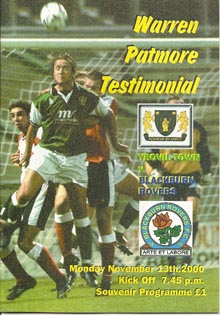 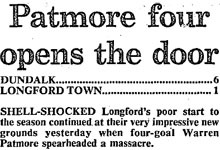 Aged 23 when he arrived at Oriel Park in August 1994 on a three month loan from Northampton Town, centre-forward Warren Patmore had already played at a bevy of clubs—Belmont, Watford (at under-11 and 12) and Brentford (under-16) to start with.

With a strong yen for golf, he wanted to become a professional golfer and spent three years away from football. He eventually returned to play with Spartan League Northwood where a Cambridge scout saw him score five goals in a game and he secured a Cambridge contract playing alongside Dion Dublin and Steve Claridge.

But under an unsympathetic manager he ended up with a succession of clubs, had a period in Cyprus, and eventually secured a contract with Millwall that resulted in an early season loan period to Cobh Ramblers in 1993-94, making 8 appearances and scoring 3 goals.

He finished the season with another loan out, this time to Northampton Town, who ended up in receivership and were only saved from relegation because the Conference winner’s ground did not pass muster.

The manager was sacked and his replacement was the unsympathetic manager (Ian Atkins) from his Cambridge spell. Hence his loan move to Dundalk where he didn’t take long to announce himself, scoring twice on the opening day League Cup fixture against Drogheda Utd and then hitting four against Longford Town to send Dundalk to the top spot in their group.

Until his loan period ended in late October he was an ever-present and was the first of five players to wear the number nine jersey as Dermot Keely led Dundalk to an improbable League Championship—the others were Joe Hanrahan, Brian Byrne, Mick Byrne and Peter Withnell.

He finished the season with his third loan period in Ireland, this time with Ards in the Irish League, where he helped them to an Irish Cup semi-final—losing to Linfield in a replay—and success in the League Cup, under captain Kevin Brady, defeating Cliftonville on penalties after extra time.

A three-season haul of 9 League goals from 60 appearances, spread across 7 clubs and mainly on loan—that was not the kind of record that had managers knocking down your door but little did Warren realise what lay ahead.

By the time he quit playing in 2004 he had over 200 goals to his name, had became a club legend at Yeovil Town with a 6-season all-games 140 goals from 287 appearances and had been honoured with international representation for the English non-league team on several occasions.

In 2005 he was voted Yeovil Town’s all-time cult hero.