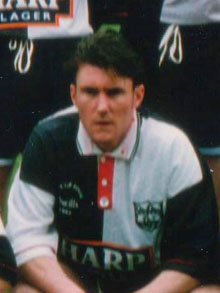 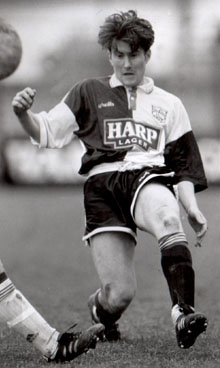 Born in Birmingham of Irish parents he was on the books of Oxford United and Norwich City before joining Shamrock Rovers at the beginning of the 1988/89 season and quickly made the left full-back position his own. At one stage during his Rovers spell he lined out with the Wexford GAA county GAA team.

After four seasons with Shamrock Rovers he left for Dundalk and he spent most of his two Oriel Park seasons playing at full-back. His first Dundalk season was a case of might have been with a fourth place League finish—a single point adrift of a trio who could not be separated in normal time—and runner up in the FAI Cup.

When Wayne left for Bohemians halfway through the following year his only reward was an FAI Runner up memento. He was Turlough O’Connor’s first signing for his new club Bohemians and over his two Boh’s terms he made a total of 16 appearances.

He later played with Newry and Cliftonville.