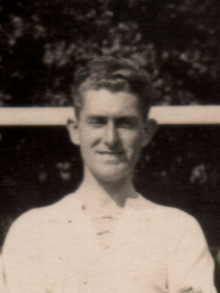 In the 1930-31 season, he was back at right-half in a near ever-present half-back line—Slowey, Ted Reed, Dicky Johnstone—that powered the team to runner-up in the League and qualification for the club’s first FAI Cup final, lost controversially to Shamrock Rovers after a replay.

The extra revenues from this season’s success provided the resources to buy a new team for the 1931-32 season, including the returned Sam Patton and new centre-half Albert Harrison, limiting Jack’s opportunities for first team duty.

Three of his appearances were at right-full, covering for the injured Andy McCluggage. But Jack’s performances with the Reserve team did not go unnoticed and in a prestige game against the Scottish Central League in March 1932, he was honoured with the centre half position on the Leinster League team.

He remained with the reserves during the Championship winning 1932-33 year. In 1939 he moved to Barrow-in-Furness, Lancashire, where he worked for many years as a fitter and turner with Vickers Armstrong. Until the mid-fifties he regularly returned with his family at holiday time to his native home in Holywood. His first senior club in the Irish League was Larne and they had recruited him from junior outfit Oldpark.