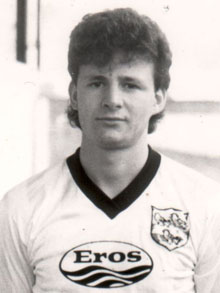 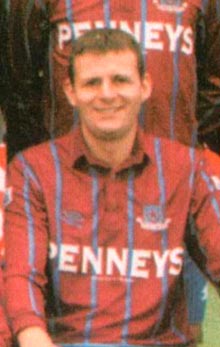 In the early 1980s, Paul McLaughlin was a member of one of the most successful under-age squads ever fielded by Dundalk. Assembled and managed by Tommy Connolly they took home all the honours in the Dublin Schoolboys’ League. In addition they achieved quality results in a number of prestigious overseas Youths Tournaments.

The son of Jim McLaughlin, Paul made a number of reserve team appearances during the 1981-82 year. A few months beyond his seventeenth birthday he made his first team debut appearance in the defeated League Cup final against Athlone Town on Dec 30th 1982 (aged 17 and 4 months).

In the absence of Sean Byrne, he made his League debut the following February in Ballybofey and held his place through the last eight games of the season, when on the final day Dundalk gave up the second place spot they had held from the beginning of January, losing a European qualification spot to Drogheda.

It also marked the end of Jim McLaughlin’s reign—by the start of the new season he was managing Shamrock Rovers.

Under new manager John Dempsey, and later Tommy Connolly, Paul became an ever-present when available, missing a half dozen winter games through injury. Now a fully fledged first-teamer, his third Oriel Park term determined the membership of the new Premier Division and Dundalk were one of a number of clubs who did a lot of sweating before winning the precious ticket.

Following the change of manager, with the summer 1985 Oriel Park arrival of Turlough O’Connor, Paul moved to Derry City, elected to membership of the newly-started Division One. After a season of getting to know you, Derry blitzed the opposition in their second term, losing once on the way to a six-point winning margin in the League and promotion to the Premier Division. Paul played in all but two League games.

While his father Jim took the manager’s job in Derry, Paul moved closer to home, signing for Newry Town for the 1987-88 season where he linked up with a batch of ex-Dundalk players—Ollie Ralph, Willie Crawley—where he was converted from a full-back to a midfield role.

In his first season at the Showgrounds he collected a County Antrim Shield winner’s medal, defeating Ballymena in the final, marking Newry’s first win in the Irish League’s oldest trophy that was celebrating its 100th birthday. Played at the Oval, the final was in doubt due to a number of bomb alerts but there was no stopping Newry and they overcame a one goal deficit to clinch their first senior trophy on a 2-1 scoreline.

Four years after leaving Oriel Park he returned there in the summer of 1989, playing reserve football under Tommy Connolly and making a couple of first team substitute appearances.

In 1990-91 just-demoted Drogheda bounced back immediately, completing a County Louth League Double when they landed the Division One title, just failing to go through the campaign undefeated after going down to their only loss in their last game at Ballybofey, thanks to an 88th minute penalty.

Under manager Liam Brien, unlike Dundalk’s Premier title that went to the wire, the only issue at stake for all of the season was who would finish runner-up and McLaughlin had pocketed his second Division One medal.

But throughout his seven years at Boyneside they remained a team that was too good for Division One but not good enough for the top tier and yo-yoed their way between the two divisions through most of the 1990s. During this period they would work their way through four managers: Liam Brien, Pat Devlin, Jim McLaughlin and Anto Whelan.

Paul participated in two more promotions gained through runner up finishes, in 1994-95 to UCD and again in 1996-97 to Kilkenny City, bouncing back immediately in each case from relegation.

He called it a day following the 1996-97 promotion after making over 200 all-competition appearances with Drogheda. In the 1992-93 year he had been honoured with selection as Drogheda Player of the Year.

In his 13 LOI 15 senior seasons he made over 250 League appearances.