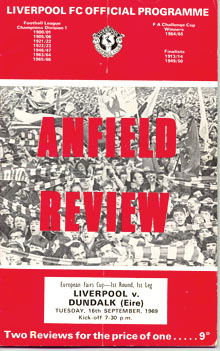 After making a substitute appearance in the opening game of the 1968-69 season in the President’s Cup, Charlie Hendricks went back to the reserves for the next couple of months, until a rash of injuries presented him with the opportunity for an extended run at the end of November.

A run of six wins in a row copper fastened Charlie’s position and brought him to the attention of the Irish Amateur selectors.He was capped for the March International against England and was reported as having an ‘outstanding’ game.

A week later he collected his first winner’s memento when Dundalk recovered from a half-time 2-goal deficit against Shamrock Rovers in the final of the Dublin City Cup, ripping through the Hoops for a 5-2 victory.

In the following year under Liam Tuohy he started in the first round of the Fairs Cup at Anfield when Liverpool had a field day—scoring within a minute and knocking in five goals in each half for a 10-0 victory.

Injuries disrupted his 1970-71 year, but he returned from another injury absence in the1971-72 year to play in the final of the Shield when Dundalk administered a 5-0 hammering to Drogheda.

In January 1973 Charlie signed for Shamrock Rovers, who after the riches of the 1960s were on the slide. At the beginning of the 1974-75 season after a dispute about bonuses, Charlie and several other players left the club.

He later turned out with Leinster League club Parkvilla.

In February 1968, Charley, while with St Francis, had been on the Irish Youths team that played back-to-back Internationals against England, finishing scoreless in Dublin early in the month and on Feb 28th England came out on top in the return fixture at Fratton Park on a 4-1 score line.

From a Democrat match report: “Is very effective when he goes forward … takes his time to settle in a match but when he gets the bit between his teeth there isn’t a better defender in the League of Ireland.”