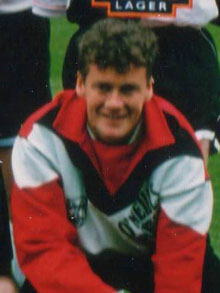 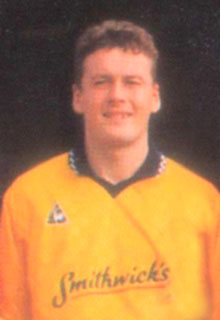 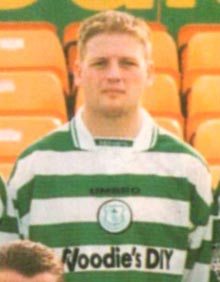 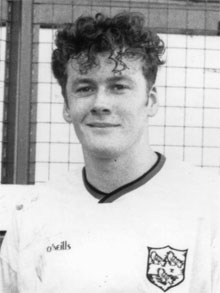 From a distinguished soccer family, Tommy Dunne is a first cousin of Irish International Richard Dunne. Hisfather Theo played with Shelbourne, Drogheda and Athlone Town and coached a number of League of Ireland teams including Shamrock Rovers, UCD and Home Farm.

A left-sided fullback, Dunne was 18-years old when making his LOI debut with Home Farm during the 1990-91 season and in June 1991 played for the national team at the World Youth Championships, when a late late goal against Korea lost a place in the quarter-finals.

By the following October he had made his Dundalk League debut, making a substitute appearance against Drogheda at Oriel Park. His first season outings were sporadic and it was not until the last five games that he got a decent run, when taking over from Mick Shelley.

He had however come to the attention of the Irish Under-21 management team and he was called up to the European Championship squad, appearing five times in the 8-match group.

Although a regular during the 1992-93 season, he failed to make the starting line-up for the FAI Cup final against Shelbourne, having to sit out the match on the bench. Joining Shelbourne for the 1993-94 term, during his first two Reds’ seasons he had to be contented with two runners-up awards—in the League Cup, losing out to Derry City in the 1993-94 final, and the following year Derry also got the better of the Reds in the 1995 FAI Cup final.

He stayed long enough with Shels to collect a winner’s medal in the 1995-96 League Cup—defeating Sligo Rovers in the two-legged final on a penalty shoot-out after extra time failed to separate them—before being transferred to Derry City. A year later Felix Healy was leading Derry to their second League Championship and Tommy had made an appearance in all but two of the 33-game campaign.

However the FAI Cup continued to be Tommy’s bogie as he was again on the losing side in a Derry/Shelbourne final and immediately afterwards Tommy was on the move again, this time to Shamrock Rovers where he stayed until his retirement five years later.

Apart from a League runner-up spot behind Shelbourne in his last season (2001-02), Rovers were not competitive during this period and even the Hoops traditionally strong area of the FAI Cup had become a waste land. There was however victory in the 1998-99 FAI Super Cup with a 2-0 win over St Patrick’s Athletic.

For three seasons Tommy managed in Finland and got his first League of Ireland appointment in 2009 as assistant to Paul Doolin in Cork and after the club had lost its Premier licence, Tommy was appointed manager of the new Cork FORAS in the First Division, leading them back to the Premier Division after a nail-biting finish to the 2011 Division One finished with a 94th minute winner from Cork.

Almost immediately after he parted company with Cork in the summer of 2013 he was appointed manager of Galway United. In his first season Tommy steered them to third place in the First Division and came out best in the play-offs with victories over First Div runner-up Shelbourne and then UCD.

The 2015 season saw another cliff-hanger before Galway retained their Premier Division ticket by the smallest of margins.Their big moment came in the League Cup but after knocking out double winners Dundalk in the Semi-Final, they went under to St Patrick's Athletic in the Galway-held final after a penalty shoot-out.

His father Theo also played with Shelbourne, captaining the Reds FAI Cup winning team in 1960, and spent almost twenty years coaching with UCD. For a short while Tommy was UCD’s under-21 manager.