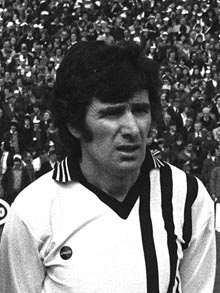 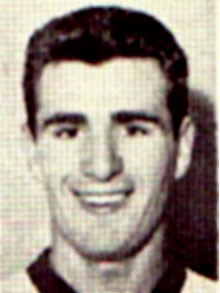 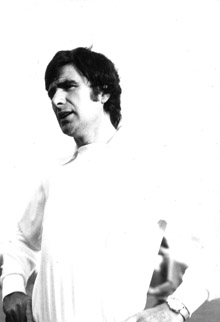 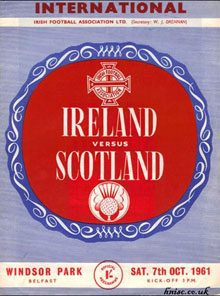 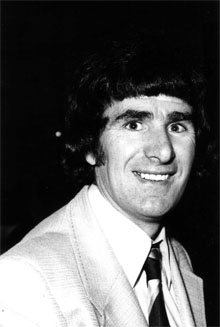 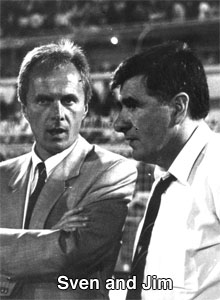 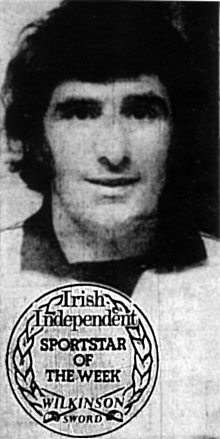 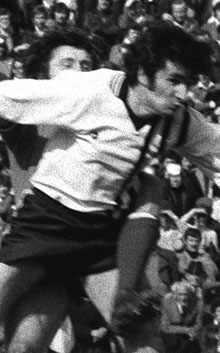 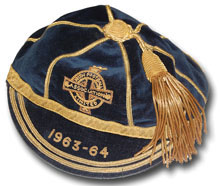 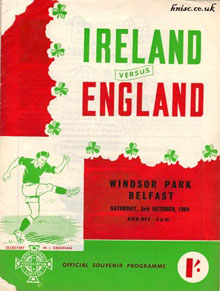 Youth International Jim McLaughlin was a couple of months short of his 17th birthday when he scored on his Derry City debut in September 1957 against Crusaders in a City Cup game at the Brandywell. Shortly afterwards he received his first Youth International honour against Scotland at Stranraer.

‘He is star material’ was the view expressed in the ‘Derry Journal’. Star material indeed. When he finally retired from football on May 1st 1999, quitting as Dundalk manager, he left an unrivalled 42 years legacy both as a player and a manager.

Born in the shadows of the Brandywell football ground, where he was a ball-boy, this became his second home from a very early age. Educated at Long Tower School and Londonderry Technical College, his early football experiences were with Churchill United and Don Bosco, but the highlight of his school days was when the Tech team won the Northern Schools Technical Cup in 1957.

His 16 goals in his debut 1957-58 season, from the left wing position, saw him top the Derry marksmen list and earned him an invite to play with West Bromwich Albion in a Youth tournament. On his return he learned that Birmingham City had made on offer to Derry City and in June 1958, for a transfer fee of £4000, Jim was on his way to St Andrews.

Although he was not required for first team duty at Birmingham in his two year stay, a move to Shrewsbury in July 1960 gave Jim his opportunity and over the following 14 years, with three clubs Shrewsbury, Swansea and Peterborough he gave full value for money.

A clever ball playing winger who was also comfortable playing as an out and out striker, in fourteen English League seasons he scored 126 League goals alone and made 456 League appearances. In October 1961 he took over the left wing spot on the Northern Ireland International team from Peter McParland, scoring against Scotland on his debut, and on two occasions scored twice in an International career of 12 appearances, scoring 6 goals.

The most memorable of these occasions was when Jim scored twice in a Windsor Park 4-3 loss to the old enemy England, coming back from a 4-0 half-time deficit. One of his most outstanding International performances came on his ‘home’ pitch at the Vetch Field, Swansea in April 1964, on a night when George Best and Pat Jennings made their International debuts in a 3-2 win over Wales.

After three seasons at Shrewsbury he had moved to Swansea Town in May 1963 for a then club record fee of £16,000 and over the next four seasons fully repaid the fee, becoming a Vetch Field regular.

His first campaign at the Vetch Field came close to both a dream and a nightmare. In the FA Cup Swansea defeated Stoke and Liverpool on the way to the semi-final, where they met Preston North End at Villa Park. McLaughlin scored and hit the wood-work three times, but Preston won through to Wembley courtesy of a controversial penalty and a freak goal scored from the half-way line. Meanwhile, in the League the Swans finished just a point away from relegation to Division Three.

McLaughlin’s time with Swansea continued in an up-and-down fashion. In 1965 Swansea succumbed to relegation, but in the following year he won his first senior honour when Chester were defeated 2-1 in the Welsh Cup Final. That season he also scored twenty League goals and won his twelfth and final Northern Ireland cap in a 4-1 win over Wales.

His international record reads played 12, won 5, drew 1, lost 6, scored 6. In addition he was capped three times as a Youth against Scotland, Wales and England—Bobby Moore was on the English Youths team at Bangor—and twice at Under-23 level, scoring on each of his appearances against Wales.

A short stay at Peterborough at the tail end of the 1966-67 season was followed, in September 1967, by a second spell at Shrewsbury—this time staying for over five years, and aggregating a club career total of almost 350 games, knocking in 100 goals.

He had the rare distinction of scoring in the FA Cup for 8 successive campaigns from 1960 to 1967, aggregating 24 Cup goals in the process.

In November 1972 his old manager at Shrewsbury, Harry Gregg, with no funds available for new players, invited him to return to become player-coach at Swansea (retitled Swansea City in his absence), hoping that the experienced McLaughlin would add stability to a team heading for relegation. However, he could not help save the Swans from the drop to Division Four, and that was where he played his final English League game, in a 3-1 defeat by Doncaster on 3 November 1973.

By the time Jim headed to Dundalk in the autumn of 1974 on a successful job hunting mission he had already added the role of club secretary to his other Swansea duties. Now closing the English League page of his football story he was about to open another page—no, a chapter full of pages—which over the following quarter of a century would provide the material that would re-write the history of a number of League of Ireland clubs.

His 20-years playing career stretched to over 700 games and almost 200 goals, while during his first 20 odd years as manager he collected 8 League of Ireland Championships (and a First Division Pennant), 6 FAI Cups and was three-times honoured with the Soccer Writers’ Personality of the Year Award.

This record would be embellished further by a rake of other trophy successes, which in the case of Dundalk alone would comprise 2 Leinster Cups (and a runner up) and 3 Presidents Cups (and another 3 runners up).

And topping up his League of Ireland body of work is a European record with Dundalk which is unparalleled in Irish soccer history—from his nine Oriel Park European competition ties, against some of the continents leading clubs, Dundalk went undefeated at home for the first eight games, with the opposition managing just three goals in the five year period.

While he failed afterwards to replicate his Oriel Park European managerial record, there was no dropping of the standards he had set in the matter of collecting League of Ireland trophies. With Shamrock Rovers he added two League-Cup Doubles (1984-5 and 1985-6) to his Dundalk Double (1978-79).

Probably his most rewarding year was in 1988-89 when he led his home town team, Derry City, to the Treble of League, FAI Cup and League Cup and for which he was the recipient of the Soccer Writers Personality of the Year Award for an unprecedented third time, augmenting his selections while at Dundalk (1978-79) and Shamrock Rovers (1983-84).

Subsequent managerial stints further enhanced his status as a giant of the League of Ireland scene, first at Shelbourne whose 1991-92 Championship victory filled a thirty year gap since their previous win, and then leading Drogheda to promotion from the First Division in 1994-95.

Already retired for a number of years, at the beginning of the 1997-98 year he answered the crisis call of Dundalk to return following the sudden departure of Eddie May. He finally walked away from dugout duty at the end of the following year, back where he had started 25 years previously, having seen Dundalk relegated from the Premier Division for the first time.

What made him one of the greats among League of Ireland managers? Astute, shrewd, and determined, he knew all that needed to be known about the game and when looking at prospective signings his 20-year apprenticeship had taught him that ability alone was not sufficient to build winning teams. Mental strength and character as much as merit were major considerations. Most critical were his motivational skills and his clear view of the absolute importance of the team unit and of the imperative of dressing-room unity.

He still maintains his football interests and contacts and is in regular attendance at Oriel Park.

Irish Independent Sport star of the Week, 23-Sept-1977 for his performance “in the victory over Hadjuk Split at Oriel Park…he consistently worried the Yugoslavs with his surges out of defence…one of which set up the winning goal for Terry Flanagan.”