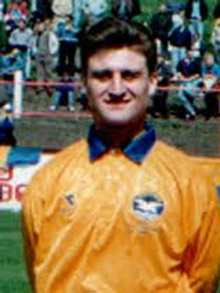 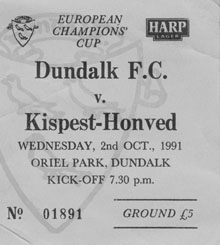 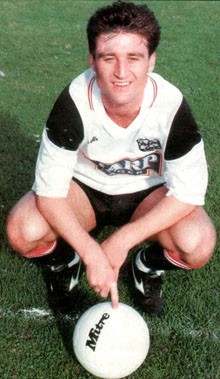 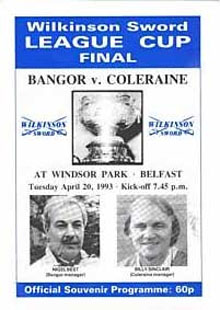 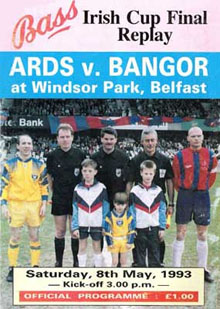 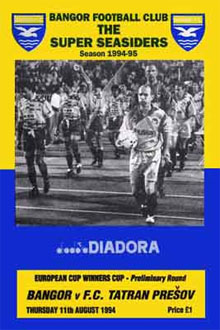 Born in Gibraltar with Irish qualification, midfielder Ricki McEvoy was just 18-years of age when he went to First Division Luton Town as an apprentice armed with a batch of under age Irish caps to his name at different levels (U-15, U-17 and U-18).

He made a single substitute English League appearance before being sent in February 1987on loan to Fourth Division Cambridge United, where he had a busier time and finished his spell there with 11 League appearances.

Shamrock Rovers was his next port of call, but the post-Milltown middle of the table Hoops were struggling against the dominance of Derry, St Pats and Dundalk.

In February 1990, he was loaned to First Division Finn Harps who, making a late season run for promotion had lost ace striker Con McLaughlin to an injury. But it was all in vain and by the time that Con returned the promotion prospects had disappeared.

At the season’s end Turlough O’Connor took him to Oriel Park where he was part of a half dozen new boys that included Alan Doherty, Tommy Dunne, Brian Irwin and Eddie Van Boxtell being blooded with the remains of the 1990-91 Championship squad.

Ricki quickly established himself as a first team regular at midfield, displacing Mick Shelley who moved to left-back. He scored in the away leg of the European Cup tie against Kispest Honved, shocking the Hungarian Champions with a beautiful goal after half an hour, but a late slip up ceded a draw and the stronger visitors ran out 2-0 winners in the Oriel Park leg.

The following October he was on the move again, this time to the Irish League’s Bangor and after a settling-in period his skilful midfield play and excellent ball control made a vital contribution to a third place League finish, just two points behind champions Linfield. But there was adequate compensation in the Irish Cup with wins over Linfield and Glentoran earning a final day berth against close neighbours Ards and ultimate victory in a second replay.

Highlights of his second year with Bangor involved memorable goals: first a 20-yard volley against Apoel Nicosia in a European Cup Winner’s Cup tie at Clandeboye Park in August 1993 and then in the 2-0 Irish Cup semi-final victory against Portadown, scoring the first goal and making the second that secured another final day appearance, but Linfield proved the stronger on this occasion.

His third Bangor term was filled with controversy following the mid-season departure of successful manager Nigel Best and his replacement as player-manager by Roddy Collins, who was sacked at season end after a nerve-wracking League finish that saw Bangor scrape into the new Premier Division.

After his third year with Bangor, Ricki moved to Glentoran for 1995-96 but by March had returned to finish the season out with Bangor.

He opened the 1996-97 year with Dermot Keely at Home Farm, but in a bid to move the club off the bottom of the Premier Division Keely’s clearout precipitated McEvoy’s third spell at Bangor in February 1997, failing by a point to make the automatic promotion spot and then losing to local rivals Ards in the play-off.

He stayed until the end of the 1997-98 term, when the Davy Chisholm-managed Seasiders again fell short, finishing runner up to the Dessie Gorman –inspired Newry Town and then lost heavily to Omagh Town in the play-off for a Premier spot.

The season end arrival of a new manager and the need for payroll cuts saw the end of the Dublin-based McEvoy’s Clandeboye tenure. A very popular member of the Clandeboye squad, he was appointed deputy skipper during his last spell and was described as “When he is on song he is one of the best playmakers on the local scene and his passes can slice open a defence.”

He finished his senior career with a final season at Monaghan. To the end of the 1998-99 season he was credited with 133 LOI appearances and 17 league goals.