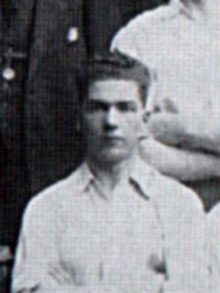 In Dundalk’s debut 1926-27 League of Ireland season 47 players made an appearance—less than a dozen had previous experience at this level. Bessbrook-born centre forward Frank Rushe was one of these. He cut his football teeth with Bessbrook Athletic, a prolific nursery, in the Portadown and District and Newry and District Leagues, leading to his signing by Glenavon.

Six goals in his first couple of Reserve team outings with the Lurgan club led to senior team promotion and his place at centre forward in the Irish Cup final of 1922, where Linfield were victorious.

In the 1922-23 season he was the leading goal scorer (9 goals) with Dublin United in the Free State League. In the following year he was Shelbourne’s leading League marksman (12 goals from 15 League appearances) when they were runner up to Bohemians for both the League and Shield titles.

By way of compensation he scored both goals in the 2-1 win over Brideville in the final of the Leinster Cup to bring his season goal haul to 20 from 29 appearances.

With Distillery he was a member of the squad that delivered the Irish Cup and the Gold Cup in 1924-25, when he made 39 appearances and contributed 17 goals, adding another club season-best to his CV, before returning to Glenavon for the 1925-26 season.

Dundalk became his fifth club in five successive seasons and he travelled to Cork for the opening fixture in 1926-27 but because of a registration hitch he did not make his debut until the following weekend away to Athlone.

Constant changes, with newcomers arriving every other week, saw Frank fill a variety of rolls, but he was back at centre forward for the Cup game against Bohemians, scoring the club’s first FAI Cup goal in a 6-1 defeat.

For the 1927-28 year he was back with Glenavon, scoring 20 goals before departing for Newry Town in January 1931. He continued to line out in the early 1930s with Newry Town.

He later became a greengrocer in his native Bessbrook and became a regular visitor to the Athletic Grounds and later Oriel Park throughout the 1930s.

In September 1924 he was selected on a Northern Ireland team to play the touring South Africa at Solitude, and he scored the opening goal in a 2-1 win for the visitors. Only recently has this game been recognised by F I F A as a full international.