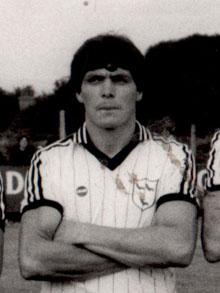 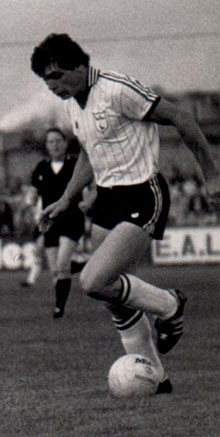 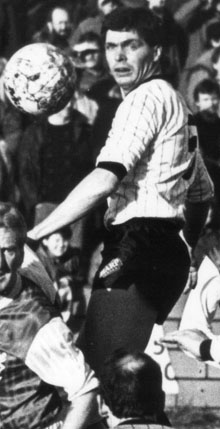 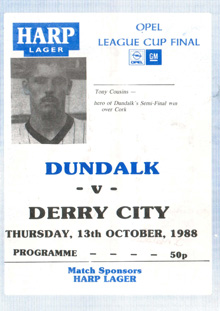 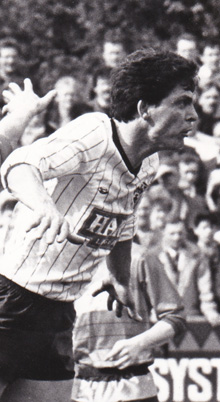 Bromley (Ballyfermot), CIE Ranch and Ballyfermot in the Leinster League was centre-forward John Cleary’s preparations for his League of Ireland debut with Shelbourne in the 1979-80 season. After spending two years with a Reds team rooted firmly to the bottom of the League, he moved to St Patrick’s Athletic where he spent another three fruitless years with the middle-of-the-table regulars and perennial first round Cup departees.

Tommy Connolly enticed him to Oriel Park for the 1984-85 year where he made his club debut in a friendly against Glasgow Celtic who expressed an interest in signing him but nothing came of it.

In a season that also saw club debuts for Martin Murray, Tom McNulty and Dessie Gorman the team sweated its way laboriously to the finishing line and just avoided becoming founder members of the about-to-be-inaugurated Division One.

His first Oriel Park spell was a short one, ended after one season by new manager Turlough O’Connor and John returned to St Patrick’s for another two seasons. After a couple of good years at Richmond Park he was pursued by both Jim McLaughlin (Shamrock Rovers) and Turlough O’Connor, now keen to have him back.

Turlough got his man and over the next three seasons John played a central role at Oriel Park. No longer a full-time striker, he had spells in midfield, defence and up-front, as well as becoming the club’s penalty taker, never missing one during his stay.

He was at the heart of the 1987-88 League-Cup Double action, being one of four League and Cup ever-presents—with Joey Malone, Alan O’Neill and Gino Lawless—and scoring the penalty goal that settled the Cup final against Derry City.

Early in the 1990-91 season, and at the age of 32, he got an offer he couldn’t refuse, and that Turlough O’Connor encouraged him to take, when he was invited to join Joey Malone, newly appointed manager of Galway United who already had Larry Wyse on board.

After another season at Galway, when he made his eighth appearance in European competition, he was appointed manager of St James’s Gate but that did not last long.

He scored on his debut and dividing his time between the no 5 and no 9 shirts in almost equal measure, he played in 15 League and Cup games while collecting an Irish League runner up award after Crusaders lost the Championship to Linfield on goal difference, but celebrated their first ever qualification for the UEFA Cup.

For a further three years John mixed playing with managing, spending time as player-manager with Division One sides Kilkenny City and finally Longford Town and he also had a playing spell with Monaghan.

Penalty scorer in Dundalk’s 1988 FAI Cup final victory over Derry City, was lauded in the Irish Times match report (Peter Byrne): “Assigned a marking role in defence with Harry McCue, Cleary calmly stepped forward when Larry Wyse won a dubious penalty, held his nerve, and one could forgive him his misplaced optimism as he turned and sought the acclaim of the Derry fans.”